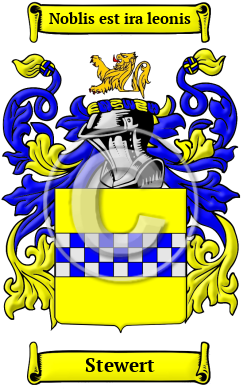 The origins the old family name Stewert can be found within medieval Scotland. While the patronymic and metronymic surnames, which are derived from the name of the father and mother respectively, are the most common form of a hereditary surname in Scotland, occupational surnames also emerged during the late Middle Ages. Many people, such as the Stewert family, adopted the name of their occupation as their surname. However, an occupational name did not become a hereditary surname until the office or type of employment became hereditary. The surname Stewert was an occupational name for a steward, the official in charge of a noble household and its treasury. One common alternate spelling of the name is a result of the influence of Mary, Queen of Scots, who was educated in France, and consequently spelled the name Steuart or Stuart.

Early Origins of the Stewert family

The surname Stewert was first found in Oswestry, Shropshire, where they had been granted lands by William the Conqueror, their liege Lord.

Early History of the Stewert family

Spelling variations of this family name include: Stuart, Steuart, Stuard, Sturt and others.

Notable among the family at this time was Charles Stewart Chief of Ardshiel; General The Rt. Hon. Sir William Steuart (1643-1726) P.C., M.P., Commander-in-Chief of Queen Anne's Forces in Ireland and benefactor of Hanover Square, London; Adam Steuart (Stuart, Stewart) (1591-1645) was a Scottish philosopher and controversialist...
Another 47 words (3 lines of text) are included under the topic Early Stewert Notables in all our PDF Extended History products and printed products wherever possible.

Migration of the Stewert family to Ireland

Some of the Stewert family moved to Ireland, but this topic is not covered in this excerpt. More information about their life in Ireland is included in all our PDF Extended History products and printed products wherever possible.

Stewert migration to the United States +

Stewert Settlers in United States in the 19th Century