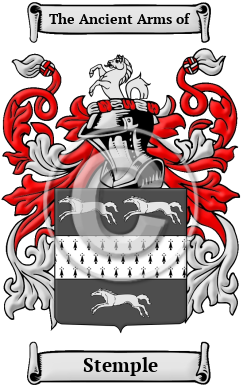 Early Origins of the Stemple family

The surname Stemple was first found in Berkshire, but early records also show John de Stampes who was listed in the Pipe Rolls of the City of London (1191) and Sir Thomas Stampe who appeared in the Feet of Fines Rolls for Essex in 1424.

Early History of the Stemple family

This web page shows only a small excerpt of our Stemple research. Another 96 words (7 lines of text) covering the years 1692, 1611 and 1653 are included under the topic Early Stemple History in all our PDF Extended History products and printed products wherever possible.

Spelling variations of this family name include: Stamp, Stamps, Stampe, Stampes, Stamper and others.

More information is included under the topic Early Stemple Notables in all our PDF Extended History products and printed products wherever possible.

In the United States, the name Stemple is the 12,313rd most popular surname with an estimated 2,487 people with that name. [1]

Stemple migration to the United States +

Stemple Settlers in United States in the 18th Century

Stemple Settlers in United States in the 19th Century