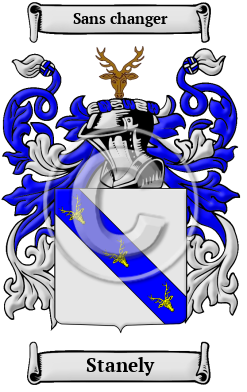 The lineage of the name Stanely begins with the Anglo-Saxon tribes in Britain. It is a result of when they lived in the county of Cumberland in an area that was defined by the Old English word stanley which means astony clearing or stony field. Stanely is a topographic surname, which was given to a person who resided near a physical feature such as a hill, stream, church, or type of tree. During the Middle Ages, as society became more complex, individuals needed a way to be distinguishable from others. Toponymic surnames were developed as a result of this need. Various features in the landscape or area were used to distinguish people from one another. In this case the original bearers of the surname Stanely were named due to their close proximity to the stanley.

Early Origins of the Stanely family

The surname Stanely was first found in Cambridgeshire at Stonely (Stoneley,) a hamlet near Kimbolton and home to Stoneley Priory which was established in 1180 and dissolved in 1536.

By the time of the Conquest, there were several listings of the name in the Domesday Book [1] including: Stanlei in Derbyshire and West Yorkshire; Stanlee in Gloucestershire; and Stanlei (now Stoneleigh) in Warwickshire. The place name literally means "stony wood clearing." [2]

"Descended from a younger branch of the Barons Audeley, of Audeley in Staffordshire, the name of Stanley, from the manor of that name in this county, in the reign of John, was assumed by William de Audleigh." [3]

Another branch of the family was established in very early times in Hornby, Lancashire. "The castle was originally founded soon after the Norman Conquest, and was subsequently the residence of the Stanleys, lords Monteagle, to one of whom the mysterious letter was sent which led to the discovery of the Gunpowder plot." [4]

Early History of the Stanely family

Migration of the Stanely family to Ireland

Some of the Stanely family moved to Ireland, but this topic is not covered in this excerpt.
Another 62 words (4 lines of text) about their life in Ireland is included in all our PDF Extended History products and printed products wherever possible.

Migration of the Stanely family

To escape the unstable social climate in England of this time, many families boarded ships for the New World with the hope of finding land, opportunity, and greater religious and political freedom. Although the voyages were expensive, crowded, and difficult, those families that arrived often found greater opportunities and freedoms than they could have experienced at home. Many of those families went on to make significant contributions to the rapidly developing colonies in which they settled. Early North American records indicate many people bearing the name Stanely were among those contributors: Christopher Stanley and his wife Susanne, who settled in Boston Mass in 1635; George and Alice Stanley settled in Virginia in 1656; Joseph and his wife Elizabeth Stanley settled in Georgia in 1732.