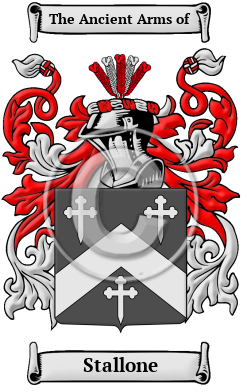 Early Origins of the Stallone family

The surname Stallone was first found in eastern Norfolk at Stalham, a post-town and parish, in the Tunstead and Happing incorporation, hundred of Happing. "The town or village is spacious, and a considerable trade in corn is carried on, for which there are commodious wharfs, one at Wayford Bridge, and another to the south. The church is a handsome structure in the early and later English styles, with a square embattled tower; it has the remains of a richly-carved screen, and the font is elaborately sculptured. " [1]

The parish dates back to the Domesday Book of 1086 when it was recorded as Stalham. [2] The name probably means "homestead by the fishing pool," from the Old English "stall" + "ham." [3]

The Hundredorum Rolls of 1273 listed Nicholas de Stalham; Ralph Stalum; and Herbert Stalun as all holding lands in Norfolk at the time. [5]

Years later, again in Norfolk, Jeffrey de Stalham, was bailiff of Yarmouth in 1336; William de Stallon, bailiff of Norwich in 1367; and John de Stalham was listed there in 1370. [6]

Early History of the Stallone family

Distinguished members of the family include John Stalham (d. 1681), English Puritan divine who was born in Norfolk, and although he is said to have been educated at Oxford, is doubtless the John Stalham who became sizar of Christ's College, Cambridge, April 1617. His son John, admitted to the same college in 1667, was born at Terling, where the puritan divine was beneficed. He was ‘first preacher of the gospel’ at Edinburgh, and on 5 May 1632 was instituted vicar of Terling, Essex, in place of Thomas Weld, who...
Another 89 words (6 lines of text) are included under the topic Early Stallone Notables in all our PDF Extended History products and printed products wherever possible.

Migration of the Stallone family

Some of the first settlers of this family name or some of its variants were: settlers who were recorded from the mid 17th century in the great migration from Europe. Migrants settled in the eastern seaboard from Newfoundland, to Maine, to Virginia, the Carolinas, and to the islands. Daniel Stalling landed in Virginia in 1607.