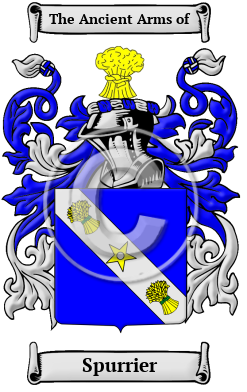 Early Origins of the Spurrier family

The surname Spurrier was first found in Devon where they held a family seat from very ancient times, as Lords of the manor of Spurway Barton. One of the first records of the name was Ricardo Greda de Spurwaye (c. 1270-1320) who held lands in the area and records show that a transfer of lands in Bears, a hamlet in Broadclyst parish, north-east of Exeter about that time. "Thurgarton Hall [in Norfolk] is the residence of W. D. Spurrell, Esq., whose family have occupied the mansion for several centuries." [1]

"Slade, [Devon] with its fine hall, once the seat of the family of that name, has long been the residence of the Spurrells, and their descendants, the Podes." [2]

Early History of the Spurrier family

This web page shows only a small excerpt of our Spurrier research. Another 55 words (4 lines of text) covering the years 1200 and 1542 are included under the topic Early Spurrier History in all our PDF Extended History products and printed products wherever possible.

More information is included under the topic Early Spurrier Notables in all our PDF Extended History products and printed products wherever possible.

In the United States, the name Spurrier is the 12,315th most popular surname with an estimated 2,487 people with that name. [3]

Spurrier migration to the United States +

Spurrier Settlers in United States in the 17th Century

Spurrier Settlers in Canada in the 18th Century

Spurrier Settlers in Australia in the 19th Century