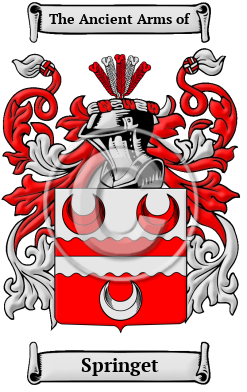 Early Origins of the Springet family

The surname Springet was first found in various counties and shires throughout Britain but especially in Sussex and Kent. The name is a diminutive of "Spring," as in a nickname for a "lively young man." [1] One of the first records of the name was William Pringett who was listed in the Pipe Rolls of Warwickshire in 1193. The Subsidy Rolls of Sussex in 1296 lists William Springet. [1] The Hundredorum Rolls of 1273 list: Julian Springald and Walter Springaud in Oxfordshire; and Alan Springold in Cambridgeshire. [2]

Early History of the Springet family

Spelling variations of this family name include: Springett, Springate, Springette, Springet and others.

Distinguished members of the family include Sir Thomas Springett of Broyle, knighted 17th September 1639; and his son, Sir Herbert Springett, created a Baronet, at the Restoration in...
Another 27 words (2 lines of text) are included under the topic Early Springet Notables in all our PDF Extended History products and printed products wherever possible.

Springet migration to the United States +

Springet Settlers in United States in the 17th Century