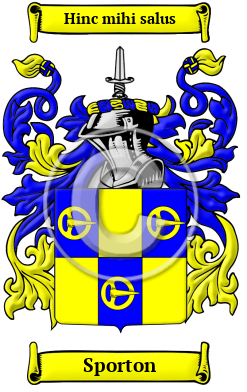 The surname Sporton originated in the place called Spalding, in Lincolnshire. Sporton is a local surname, which belongs to the category of hereditary surnames. There are a variety of types of local surnames, some of which include: topographic surnames, which could be given to a person who lived beside any physical feature, such as a hill, stream, church or type of tree. Habitation names form the other broad category of surnames that were derived from place-names. They were derived from pre-existing names for towns, villages, parishes, or farmsteads. Other local names are derived from the names of houses, manors, estates, regions, and entire counties. The earliest members of the Sporton family on record, were found in Lincolnshire, where they settled on lands granted by William the Conqueror, following the Norman invasion, in 1066. The Sporton family rose to prominence in Scotland, however.

Early Origins of the Sporton family

The surname Sporton was first found in Lincolnshire, at Spalding, a market-town and parish, and the head of a union, in the wapentake of Elloe. "This place, which is said to have derived its name from a spa or chalybeate spring in the market-place, is of great antiquity, as appears from the remains of Roman embankments in the neighbourhood. In the Saxon annals, it is mentioned as one of the points on the boundary line of the estate belonging to Crowland Abbey, and as the residence of Thorold de Buckenhale, the last Saxon governor of the province of Mercia, who, in 1051, founded here a cell for a prior and five monks subordinate to that monastery. At the Norman Conquest, the manor was presented to Ivo Talbois, Earl of Angiers, and nephew of the Conqueror, who built a castle here, by which the religious society were so harassed that they abandoned their convent." [1]

Originally, they were tenants of the Norman Baron Randolph Mechin, Earl of Chester and later held Spaulding Abbey.

The first on record was Gilbert de Spaldingis (Latin form) who held lands here in 1175. [2]

Further to the north in Scotland the name is "from the town of Spalding in Lincolnshire. Radulphus de Spalding who witnessed a charter of the mill of Caterline in Kincardineshire in 1225 and is probably the first of the name recorded in Scotland. Magister John de Spaldyn witnessed a grant of lands in Aberdeen, c. 1294. " [4]

Early History of the Sporton family

Spelling variations of this family name include: Spaulding, Spalding, Spaldene and others.

Another 42 words (3 lines of text) are included under the topic Early Sporton Notables in all our PDF Extended History products and printed products wherever possible.

Migration of the Sporton family