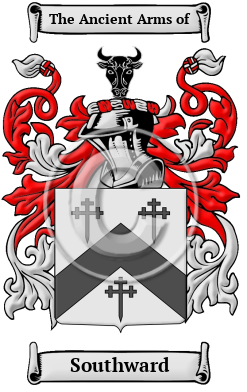 Early Origins of the Southward family

The surname Southward was first found in Lancashire, principally in the area of Samlesbury Hall where they held a family seat from very ancient times, as Lords of the manor of Southworth. Specifically, Houghton with Middleton and Arbury was an ancient family homestead. "The three manors were granted by the Baron of Newton at an early period to the Southworths, at first of Southworth, but afterwards of Samlesbury. Sir John Southworth, said to have been a favourite of Queen Elizabeth's, is supposed to have sold much of the family property in this quarter; which is extremely probable, as in the 11th of Charles I., of all the extensive possessions of the Southworths, the manor of Samlesbury was alone remaining." [1]

Early History of the Southward family

This web page shows only a small excerpt of our Southward research. Another 55 words (4 lines of text) covering the years 1592 and 1654 are included under the topic Early Southward History in all our PDF Extended History products and printed products wherever possible.

Notables of this surname at this time include: Sir Thomas Southworth of Southworth; and Father John Southworth (also called Saint John Southworth) (1592-1654), an English Catholic martyr who was from the Lancashire family who lived...
Another 34 words (2 lines of text) are included under the topic Early Southward Notables in all our PDF Extended History products and printed products wherever possible.

Migration of the Southward family to Ireland

Some of the Southward family moved to Ireland, but this topic is not covered in this excerpt. More information about their life in Ireland is included in all our PDF Extended History products and printed products wherever possible.

Southward migration to the United States +

Southward Settlers in United States in the 19th Century

Southward Settlers in United States in the 20th Century

Southward Settlers in New Zealand in the 19th Century

Southward Settlers in West Indies in the 17th Century

Suggested Readings for the name Southward +