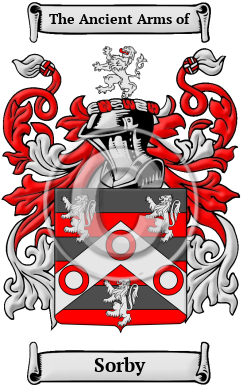 Early Origins of the Sorby family

The surname Sorby was first found in Galloway (Gaelic: Gall-ghaidhealaibh), an area of southwestern Scotland, now part of the Council Area of Dumfries and Galloway, that formerly consisted of the counties of Wigtown (West Galloway) and Kirkcudbright (East Galloway), where they held a family seat from very ancient times, as Lords of the manor of Sorby and the parish, some say well before the Norman Conquest and the arrival of Duke William at Hastings in 1066 A.D. The first record of the name was in the Wigtonshire now called the parish of Sorby. Many of the family moved from here to the parish of Stonehouse, Lanarkshire. Sorbie is a small village in Dumfries and Galloway, Scotland. Sorbie Tower lies in Wigtownshire, about a mile out of the village of Sorbie on the Garlieston Road. The old stone structure is in ruins today but stands close to Sorbie Motte, an earlier Pictish wood fort dating back to the 1100's.

Early History of the Sorby family

This web page shows only a small excerpt of our Sorby research. Another 84 words (6 lines of text) covering the years 166 and 1662 are included under the topic Early Sorby History in all our PDF Extended History products and printed products wherever possible.

More information is included under the topic Early Sorby Notables in all our PDF Extended History products and printed products wherever possible.

Sorby migration to the United States +

Sorby Settlers in United States in the 19th Century

Sorby Settlers in Australia in the 19th Century