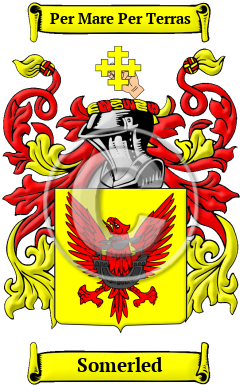 The Viking settlers of ancient Scotland were the first to use the name Somerled. It was a name for a the Old Norse word sumarlithi, which means mariner, Viking, summer wanderer, or sailor.

Early Origins of the Somerled family

The surname Somerled was first found in the island of South Uist, where they held a family seat from very ancient times, some say well before the Norman Conquest and the arrival of Duke William at Hastings in 1066 A.D. Descended from Somerled, King of the Vikings, scion of the MacDonald, Lord of the Isles, who died about 1057.

The first record of the name Somerled being used as a name was at Dunkeld, and the link between this person in 1169 and Somerled who had died 100 years before is not clear.

Another source notes that Sumerled or Somerled, Lord of the Isles (d. 1164), was "according to the Celtic tradition, the son of Gillebrede, son of Gilladoman, sixth in descent from Godfrey MacFergus, called in the Irish chronicle Toshach of the Isles; but some suppose him of Norse origin. " [1]

Early History of the Somerled family

This web page shows only a small excerpt of our Somerled research. Another 128 words (9 lines of text) covering the years 1238 and 1400 are included under the topic Early Somerled History in all our PDF Extended History products and printed products wherever possible.

Intuition and sound were the primary sources medieval scribes used to judge appropriate spellings and translations for names. The spelling of a name thus varied according to who was doing the recording. The different spelling variations of Somerled include Somerled, M'Illurdy, M'Corle, M'Coull, Somerledy and others.

More information is included under the topic Early Somerled Notables in all our PDF Extended History products and printed products wherever possible.

Somerled migration to the United States +

In their new home, Scots found land and opportunity, and some even fought for their new freedom in the American War of Independence. Some, who remained loyal to the crown went north to Canada as United Empire Loyalists. In this century, the ancestors of both of these groups have begun recovering their illustrious national heritage through Clan societies and other Scottish historical organizations. Early immigration and passenger lists indicate many people bearing the Somerled name:

Somerled Settlers in United States in the 18th Century

Motto: Per Mare Per Terras
Motto Translation: By sea and by land.