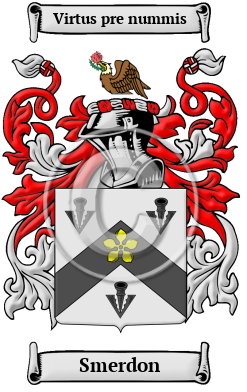 The name Smerdon comes from the ancient Anglo-Saxon culture of Britain. It was a name for a person who was referred to as smeart which meant that the original bearer was quick and active. A broad and miscellaneous class of surnames, nickname surnames referred to a characteristic of the first person who used the name. They can describe the bearer's favored style of clothing, appearance, habits, or character. Nickname surnames were frequently the result of a spontaneous reaction to a particular occasion or event.

Early Origins of the Smerdon family

The surname Smerdon was first found in Suffolk, where they held a family seat from very ancient times, some say well before the Norman Conquest and the arrival of Duke William at Hastings in 1066 A.D.

Early History of the Smerdon family

Another 33 words (2 lines of text) are included under the topic Early Smerdon Notables in all our PDF Extended History products and printed products wherever possible.

Smerdon Settlers in Australia in the 19th Century