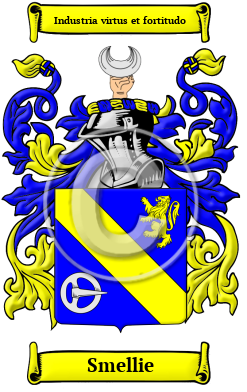 The Hebrides islands and Western coastal mountains of Scotland were once part of the ancient kingdom of Dalriada. The name Smellie was born there, as a nickname for a for a person noted for their smile, or happy personality. Smellie is thus, a nickname surname, which belongs to the category of hereditary surnames. Nicknames form a broad and miscellaneous class of surnames, and can refer directly or indirectly to one's personality, physical attributes, mannerisms, or even their habits of dress. The surname Smellie comes from the Old English word, smile, which means grin. Therefore, the surname Smellie would have been adopted by someone with a distinct smile, or grin.

Early Origins of the Smellie family

The surname Smellie was first found in Cumberland, a historic county of North West England, now known as Cumbria.

Early History of the Smellie family

Translation in medieval times was an undeveloped science and was often carried out without due care. For this reason, many early Scottish names appeared radically altered when written in English. The spelling variations of Smellie include Smiley, Smellie, Smyly, Smyley, Smilley, Smilie and many more.

Another 48 words (3 lines of text) are included under the topic Early Smellie Notables in all our PDF Extended History products and printed products wherever possible.

Migration of the Smellie family to Ireland

Some of the Smellie family moved to Ireland, but this topic is not covered in this excerpt.
Another 163 words (12 lines of text) about their life in Ireland is included in all our PDF Extended History products and printed products wherever possible.

Smellie migration to the United States +

Many of the ancestors of Dalriadan families who arrived in North America still live in communities along the east coast of Canada and the United States. In the American War of Independence many of the original settlers traveled north to Canada as United Empire Loyalists. In the late 19th and early 20th centuries the ancestors of many Scots began recovering their collective national heritage through Clan societies, highland games, and other patriotic events. Research into the origins of individual families in North America revealed records of the immigration of a number of people bearing the name Smellie or a variant listed above:

Smellie Settlers in United States in the 18th Century

Smellie Settlers in United States in the 19th Century

Smellie Settlers in New Zealand in the 19th Century