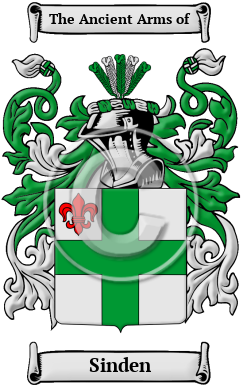 Early Origins of the Sinden family

The surname Sinden was first found in Yorkshire where the name is derived from a geographical locality. 'of Sandal,' a parish, now Sandal Magna, near Wakefield, Yorkshire. Long Sandall, a parish four miles from Doncaster. [1] [2]

"This place is of high antiquity, and was long the baronial seat of the lords of Wakefield, of whom John Plantagenet, the last Earl of Warren, erected a strong castle here about the year 1320, which in the reign of Edward III. was occupied by Edward Balliol, one of the competitors for the throne of Scotland. The castle became the property of Richard Plantagenet, Duke of York, who fell in the battle of Wakefield, in 1460; and was subsequently the residence of his son, Richard, Duke of Gloucester, afterwards Richard III." [3]

The Yorkshire Poll Tax Rolls list: Johannes de Sandall (1379); and Isabella de Sandale (1370) as both residing there at that time. (Barsley)

Further to the north in Scotland, John de Sandall or de Sandele, appears as Camerarius Scocie, c. 1361 and was listed as an Englishman. [4]

John de Sandale (died 1319), was Bishop of Winchester and Chancellor and "was probably a native of Yorkshire." [5]

Early History of the Sinden family

This web page shows only a small excerpt of our Sinden research. Another 94 words (7 lines of text) covering the years 1303, 1374, 1455, 1487 and 1889 are included under the topic Early Sinden History in all our PDF Extended History products and printed products wherever possible.

More information is included under the topic Early Sinden Notables in all our PDF Extended History products and printed products wherever possible.

Sinden migration to the United States +

Sinden Settlers in United States in the 19th Century

Sinden Settlers in Canada in the 19th Century