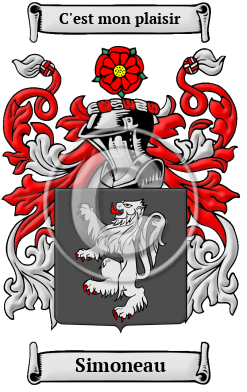 Early Origins of the Simoneau family

The surname Simoneau was first found in Lorraine where they held a family seat and are said to be descended from the first French Simon or Sigismond, the Duke of Lorraine, 1115 A.D. who was succeeded by Simon II in 1179. There is also some distant relationship to Simond, King of Bourgogne. Robert Simon is cited as a knight in 1169. [1]

This prolific family dispersed to many parts of France including Kerbringal, Val-au-Houlle, Vallemoisan, Villeneuve and Ligou in Brittany, Plainmarais in Normandie, Quirielle in Bourbonnais, Maine, Laval, Montillemart and Ratisbone. Abbot Honoré-Richard Simon was a noted researcher who died in 1693. Richard Simon was a celebrated orator who died in 1712. Denis Simon was a noted jurist who died in 1731. Antoine Simon was guardian of the dauphin Louis XVII at Temple Prison in 1793. In Britain this surname Simon became the family name of the Viscounts and Barons Simon.

Gregoire Simon, born in 1631, son of Jean and Simone (née Bancherelle), travelled to Canada in the 17th century. He married Jeanne Collet, born in 1645, daughter of Michel and Marie (née Henaut), in Montreal, Quebec on 31st December 1668. They settled together in Montreal until they passed away on 8th May 1691. [2]

Early History of the Simoneau family

This web page shows only a small excerpt of our Simoneau research. More information is included under the topic Early Simoneau History in all our PDF Extended History products and printed products wherever possible.

More information is included under the topic Early Simoneau Notables in all our PDF Extended History products and printed products wherever possible.

Simoneau migration to the United States +

Simoneau Settlers in United States in the 20th Century

Simoneau Settlers in Canada in the 17th Century

Simoneau Settlers in Canada in the 18th Century

Motto: C'est mon plaisir
Motto Translation: It is my pleasure.