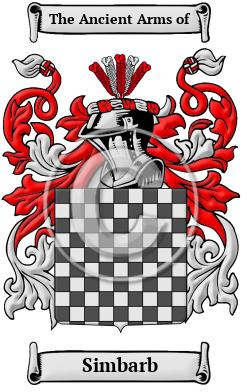 Early Origins of the Simbarb family

The surname Simbarb was first found in "Normandy where a town and two villages bear the name of this saint; but from which of them the existing family is derived it would be hard to say. The town - Ste. Barbe-en-Auge - contained a Priory of Canons Regular, founded by King Stephen, and endowed by him with lands in England." [1]

Early History of the Simbarb family

More information is included under the topic Early Simbarb Notables in all our PDF Extended History products and printed products wherever possible.

Migration of the Simbarb family to Ireland

Some of the Simbarb family moved to Ireland, but this topic is not covered in this excerpt.
Another 59 words (4 lines of text) about their life in Ireland is included in all our PDF Extended History products and printed products wherever possible.

Simbarb migration to the United States +

Simbarb Settlers in United States in the 17th Century