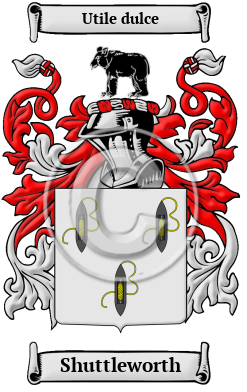 Early Origins of the Shuttleworth family

The surname Shuttleworth was first found in Lancashire, at Shuttleworth, an ecclesiastical parish, in the parish and poor-law union of Bury, hundred of Salford. Today it is a hamlet at the northeastern extremity of the Metropolitan Borough of Bury, in Greater Manchester. [1]

The place name Shuttleworth derives from the Old English words "scyttels" + "worth" and literally means "gated enclosure." Early spellings of the hamlet included Suttelsworth in 1227 and Shuttelesworthe in 1296. [2]

As one might expect, the name could have been an occupational name for someone involved in either making shuttles or as a trade. In this case, the name was derived from the Old English word "scytel, or the Middle English words shittle, schetylle, schutylle, an instrument used in weaving, a shuttle, and the surnames denote a maker of shuttles or, more probably, 'a weaver' " [3]

"The Shuttleworths of Shuttleworth Hall, in the parish of Whalley, Lancashire, were in residence there as early as 3 Edward III (1339), when Henry de Shuttleworth died seised of it and eight oxgangs." [4]

"Shuttleworth is the name of a Lancashire village. Shuttleworth Hall, in the parish of Whalley, was the original seat of the family of the name before their removal, in the reign of Richard II., to Gawthorpe, where they still resided in the 17th century; fifty years ago the early seat of the family was occupied as a farmhouse; the Shuttleworths of Hacking, who flourished from the 13th to the 16th century, were a branch of this family. In 1588 Serjant Shuttleworth contributed £25 to the Armada Fund (Sp.). The Shuttleworths represented Preston in Parliament at different times during the 17th and 18th centuries. The name is also established in the Leeds district of the West Riding [of Yorkshire]. There is also a Derbyshire village thus called." [5]

There are records in Scotland, but "this surname, recorded in Dumfriesshire, is most probably of recent introduction from England. It is of local origin from Shuttleworth in the parish of Bury, Lancashire." [6]

Early History of the Shuttleworth family

Spelling variations of this family name include: Shuttleworth, Shettleworth, Shottleworth and many more.

Notables of this surname at this time include: Sir Kay Shuttleworth; Richard Shuttleworth (1587-1669), an English politician, High Sheriff of Lancashire in 1618 and Member of Parliament for Preston (1640-1648); and Obadiah Shuttleworth (died 1734), English composer, violinist and Organist of St Michael, Cornhill (1723-1734.) Obadiah Shuttleworth (1675?-1734), organist, son of Thomas Shuttleworth of Spitalfields, teacher of music, and a transcriber of Corelli's works when they were in great demand in England, was born in London about 1675. He practised at home with his brothers, and became so excellent a violinist that he took part in the concerts of Thomas Britton, and...
Another 109 words (8 lines of text) are included under the topic Early Shuttleworth Notables in all our PDF Extended History products and printed products wherever possible.

In the United States, the name Shuttleworth is the 11,631st most popular surname with an estimated 2,487 people with that name. [7]

Shuttleworth migration to the United States +

Shuttleworth Settlers in United States in the 17th Century

Shuttleworth Settlers in United States in the 19th Century

Shuttleworth Settlers in Australia in the 19th Century

Shuttleworth Settlers in New Zealand in the 19th Century

Motto: Utile dulce
Motto Translation: The useful with the agreeable.