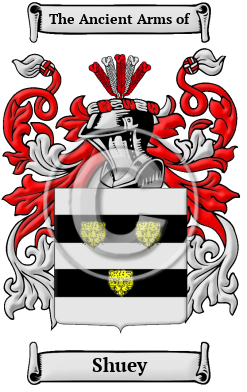 Early Origins of the Shuey family

The surname Shuey was first found in Devon where they held a family seat. The name is believed to be derived from Shobrooke, a parish in Devon about two miles from Crediton in the union of Crediton, hundred of West Budleigh. [1]

The parish dates back to Saxon times when it was known as Sceocabroc in 938 and literally means "brook haunted by an evil spirit," from the Old English "sceocca" + "broc." [2]

By the time of the taking of the Domesday Book by Duke William of Normandy the parish was held by the Count of Mortain and there was probably a close relationship to another Shorbrooke, that of Shobrooke in Morchard Bishop. It is most likely that the parish was held by a relative of Count Mortain, half brother of Duke William. The Count had one son, William, and three daughters. Conjecturally, this family surname is descended. Through the centuries since the name has been subject to many interpretations of spelling.

Early History of the Shuey family

This web page shows only a small excerpt of our Shuey research. Another 39 words (3 lines of text) covering the years 1641 and 1642 are included under the topic Early Shuey History in all our PDF Extended History products and printed products wherever possible.

More information is included under the topic Early Shuey Notables in all our PDF Extended History products and printed products wherever possible.

In the United States, the name Shuey is the 11,449th most popular surname with an estimated 2,487 people with that name. [3]

Shuey migration to the United States +

Shuey Settlers in United States in the 18th Century