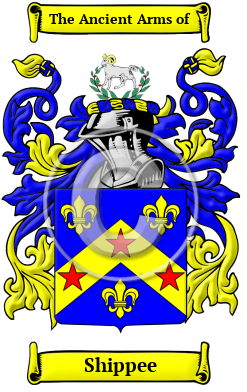 The descendants of the Boernician tribe of ancient Scotland were the first to use Shippee as a surname. It is a name for a shepherd, one who guarded sheep. In Scotland, the name was often Latinized as pastor in early charters. [1] In this latter case, the Biblical reference to paschal lamb, the Lamb of God or Agnus Dei should be understood.

Early Origins of the Shippee family

The surname Shippee was first found in Peebles, where William and Walter Shepherd (recorded in the Latin form "Pastor") were cited in legal documents in the year 1262. One hundred years later we find a branch of the family in Morayshire, where Henricus Scyphard held land in Elgin in 1363. [1]

Early History of the Shippee family

This web page shows only a small excerpt of our Shippee research. Another 72 words (5 lines of text) covering the years 1513, 1565, 1605, and 1649 are included under the topic Early Shippee History in all our PDF Extended History products and printed products wherever possible.

Over the years, Shippee has been written It appears under these variations because medieval scribes spelled names according to sound rather than by any over-arching set of rules. Shepherd, Sheppard, Shepphard, Sheepheard, Sheepherd, Shippert, Shepard, Shephard and many more.

Another 29 words (2 lines of text) are included under the topic Early Shippee Notables in all our PDF Extended History products and printed products wherever possible.

In the United States, the name Shippee is the 16,349th most popular surname with an estimated 2,487 people with that name. [2]

Migration of the Shippee family to Ireland

Some of the Shippee family moved to Ireland, but this topic is not covered in this excerpt.
Another 50 words (4 lines of text) about their life in Ireland is included in all our PDF Extended History products and printed products wherever possible.

Migration of the Shippee family

When these Boernician-Scottish settlers arrived in North America they brought little with them and often had restart their lives from scratch. Through time, much of their heritage was lost, and it is only this century through Clan societies and highland games that many have recovered their national heritage. Research into various historical records has revealed some of first members of the Shippee family to immigrate North America: John Shepherd, who sailed from Aberdeen to Quebec in 1834 and settled near Brantford Ontario; John Shepherd was a Loyalist with the Royal Garrison Battalion, who moved to Nova Scotia in 1784..