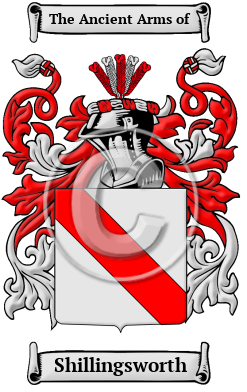 Early Origins of the Shillingsworth family

The surname Shillingsworth was first found in Devon where they held a family seat as Lords of the Manor of Shillingford. This unique name is easily explained by any tax collector at the time of the taking of the Domesday Book a census taken 1086 by Duke William of Normandy after his Conquest of England in 1066. Shillingford lands represented the annual tax payable to the King via his under-tenant. One shilling of taxes per year in those days meant a sizeable piece of land of many acres.

The lands of Shillingford, originally called Selingforde in Devon were occupied by William Cheever at that time, who held his lands from Fulchere, a Norman noble.

Conjecturally, the Shillingfords are descended from this Norman. The toll extracted from travelers for crossing the river Exe obviously related also to the person of Shillingworth, an abbreviation of Shillingworthy, hence, the surname Shillingworth is similarly from the same origin.

Shillingworthy described a freeman, next in rank below the Lord of the Manor, who was a worthy, that is a person who had sole and indisputable possession of a means of income from a particular source, such as Mucksworthy, the most valuable commodity in this strictly agricultural community, where the right to graze in a pasture and the right to collect and sell the manure made anyone a rich man.

To reinforce this statement of power, there also emerged the name Shillinglaw, a person who virtually wrote his own local rules about who and how much would be charged for this vital ford crossing of the River Exe to Exeter, one of the largest towns in England at the taking of the Domesday Book in 1086, it having 300 King's houses.

Early History of the Shillingsworth family

This web page shows only a small excerpt of our Shillingsworth research. Another 85 words (6 lines of text) covering the years 108 and 1086 are included under the topic Early Shillingsworth History in all our PDF Extended History products and printed products wherever possible.

More information is included under the topic Early Shillingsworth Notables in all our PDF Extended History products and printed products wherever possible.

Migration of the Shillingsworth family

Some of the first settlers of this family name or some of its variants were: Will Shillingford who settled in Jamaica in 1773.