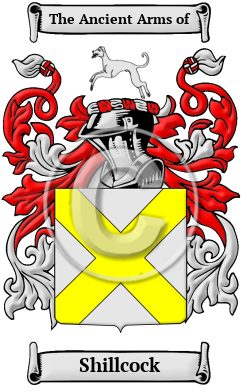 Shillcock is one of the oldest family names to come from the Anglo-Saxon tribes of Britain. It is derived from the baptismal name for the son of Cecil, deriving from the nickname Sill. After the Norman Conquest, the Old English naming system gradually dissolved. Old English names became less common and were replaced by popular continental European names. The earliest surnames in England were found shortly after the Norman Conquest and are of Norman French rather than native English origins.

Early Origins of the Shillcock family

The surname Shillcock was first found in Derbyshire where they held a family seat from early times and were anciently descended from the distinguished Saxon family who held a family seat there well before the Norman Conquest. The name is derived from a colloquial term in Derbyshire about the year 1000 describing a thrush, i.e. a "shrilcock" or "shilcock."

Early History of the Shillcock family

This web page shows only a small excerpt of our Shillcock research. Another 111 words (8 lines of text) covering the years 1200, 1283, 1379, and 1781 are included under the topic Early Shillcock History in all our PDF Extended History products and printed products wherever possible.

More information is included under the topic Early Shillcock Notables in all our PDF Extended History products and printed products wherever possible.

Migration of the Shillcock family

To escape the unstable social climate in England of this time, many families boarded ships for the New World with the hope of finding land, opportunity, and greater religious and political freedom. Although the voyages were expensive, crowded, and difficult, those families that arrived often found greater opportunities and freedoms than they could have experienced at home. Many of those families went on to make significant contributions to the rapidly developing colonies in which they settled. Early North American records indicate many people bearing the name Shillcock were among those contributors: Ann Silcock who landed in America in 1748; William Silcock settled in Virginia in 1729; Roger Silcocke settled in America in 1660; Grace Silcockes settled in Virginia in 1670.