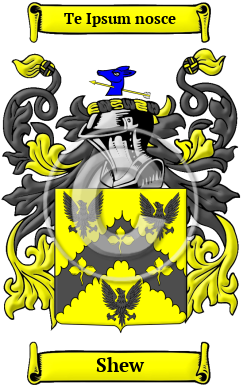 The surname Shew was both an Irish and Scotch name. It is derived from the Gaelic personal name "Sithech," meaning "wolf."

Early Origins of the Shew family

The surname Shew was first found in Perthshire (Gaelic: Siorrachd Pheairt) former county in the present day Council Area of Perth and Kinross, located in central Scotland, where they held a family seat on the lands of Muthill with manor and estates in that shire. The first mention of the Clan was their recorded presence at the General Council by King Malcolm Canmore at Forfar in 1061. However, this name has come to be known as Irish where it is a common name, especially in north-east Ulster.

Early History of the Shew family

This web page shows only a small excerpt of our Shew research. Another 68 words (5 lines of text) covering the years 1689, 1799, 1825, 1843, 1876, and 1895 are included under the topic Early Shew History in all our PDF Extended History products and printed products wherever possible.

Another 35 words (2 lines of text) are included under the topic Early Shew Notables in all our PDF Extended History products and printed products wherever possible.

Shew migration to the United States +

Shew Settlers in United States in the 17th Century

Shew Settlers in United States in the 18th Century

Shew Settlers in United States in the 19th Century

Shew Settlers in Canada in the 18th Century

Shew Settlers in Australia in the 19th Century

Historic Events for the Shew family +