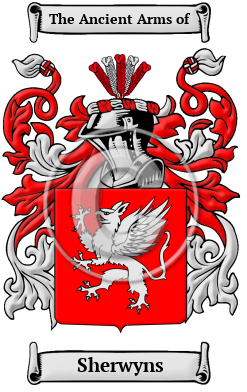 The generations and branches of the Sherwyns family share a name that has its roots in the ancient Anglo-Saxon culture of Britain. The name Sherwyns comes from the baptismal name for the son of Sherwin. [1] Alternatively the name could have been from the Old English word Scirwine (bright, friend); a nickname for a fast runner, "shear wind." [2]

Early Origins of the Sherwyns family

The surname Sherwyns was first found in Nottinghamshire at Bramcote, a parish, in the union of Shardlow, S. division of the wapentake of Broxtow. [3] However, we must look to Oxfordshire to find the earliest listings as the Hundredorum Rolls of 1273 listed: John Surewyne; and William Surewyne as both residing there at that time. [1]

But it is Nottinghamshire that the lion's share of the family claim descent. "Sherwin was a well known name in Nottingham two centuries ago. Between 1623 and 1716, five mayors of that town bore this name." [4]

Early History of the Sherwyns family

This web page shows only a small excerpt of our Sherwyns research. Another 79 words (6 lines of text) covering the years 1550, 1581, 1581, 1607, 1687, 1645 and 1709 are included under the topic Early Sherwyns History in all our PDF Extended History products and printed products wherever possible.

Until quite recently, the English language has lacked a definite system of spelling rules. Consequently, Anglo-Saxon surnames are characterized by a multitude of spelling variations. Changes in Anglo-Saxon names were influenced by the evolution of the English language, as it incorporated elements of French, Latin, and other languages. Although Medieval scribes and church officials recorded names as they sounded, so it is common to find one person referred to by several different spellings of his surname, even the most literate people varied the spelling of their own names. Variations of the name Sherwyns include Sherwin, Sherwyn, Sherwins and others.

Notables of this surname at this time include: Saint Ralph Sherwin (1550-1581) was an English Roman Catholic priest born at Radesley, near Langford, Derbyshire who was charged with having conspired to procure the queen's deposition and death, and to promote rebellion at home and invasion of the...
Another 46 words (3 lines of text) are included under the topic Early Sherwyns Notables in all our PDF Extended History products and printed products wherever possible.

Migration of the Sherwyns family to Ireland

Some of the Sherwyns family moved to Ireland, but this topic is not covered in this excerpt.
Another 52 words (4 lines of text) about their life in Ireland is included in all our PDF Extended History products and printed products wherever possible.

Migration of the Sherwyns family

Searching for a better life, many English families migrated to British colonies. Unfortunately, the majority of them traveled under extremely harsh conditions: overcrowding on the ships caused the majority of the immigrants to arrive diseased, famished, and destitute from the long journey across the ocean. For those families that arrived safely, modest prosperity was attainable, and many went on to make invaluable contributions to the development of the cultures of the new colonies. Research into the origins of individual families in North America revealed records of the immigration of a number of people bearing the name Sherwyns or a variant listed above: John Sherwin who arrived in New England in 1679; John Sherwin arrived in New York in 1820; John, Thomas and William Sherwin, all arrived in Philadelphia, Pennsylvania between 1840 and 1870..