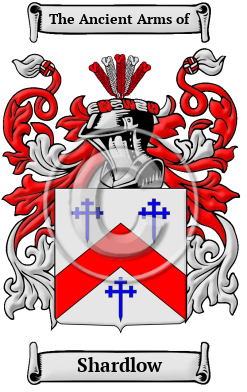 The roots of the Anglo-Saxon name Shardlow come from when the family resided in the township of Shardlow in the parish of Aston-upon-Trent in the county of Derbyshire. This place name was listed as Serdelau in the Domesday Book and Shardelow in 1279 in the Calendar of Fines of the County of Derby. [1]

Early Origins of the Shardlow family

The surname Shardlow was first found in Derbyshire, at Shardlow, a village that dates back to at least the Domesday Book of 1086 where it was listed as Serdelau and literally meant "mound with a notch or indentation" from the Old English words sceard + hlaw. [2]

Sir John de Shardelowe or Scherdelow (died 1344?) was an English judge who appeared as an "advocate in the reign of Edward II, and on 28 Jan. 1332 was appointed a judge of the court of common pleas and received knighthood. During his lifetime he settled his manor of Thompson, Norfolk, upon his elder son, Sir John de Shardelowe, and, in addition, died seised of the manor of Fulbourn and of lands in Leverington and Wisbeach in Cambridgeshire, of the manors of Barrow and Cowlinge or Cooling, and of lands in Brandon, Cavenham, and elsewhere in Suffolk, and of land in Downham in Norfolk." [3]

Early History of the Shardlow family

This web page shows only a small excerpt of our Shardlow research. Another 90 words (6 lines of text) covering the years 158 and 1589 are included under the topic Early Shardlow History in all our PDF Extended History products and printed products wherever possible.

More information is included under the topic Early Shardlow Notables in all our PDF Extended History products and printed products wherever possible.

Migration of the Shardlow family to Ireland

Some of the Shardlow family moved to Ireland, but this topic is not covered in this excerpt. More information about their life in Ireland is included in all our PDF Extended History products and printed products wherever possible.

Shardlow migration to the United States +

For many English families, the political and religious disarray that shrouded England made the far away New World an attractive prospect. On cramped disease-ridden ships, thousands migrated to those British colonies that would eventually become Canada and the United States. Those hardy settlers that survived the journey often went on to make important contributions to the emerging nations in which they landed. Analysis of immigration records indicates that some of the first North American immigrants bore the name Shardlow or a variant listed above:

Shardlow Settlers in United States in the 17th Century

Shardlow Settlers in United States in the 20th Century