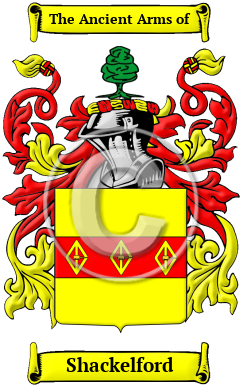 The Shackelford surname was a habitational name from Scackleton, a village and civil parish in the Ryedale district of North Yorkshire. [1] The village is mentioned three times in the Domesday Book as Scacheldene or Scachelsey. [2]

The place name probably means "valley by a point of land," from the Old English scacol + denu. [3] Another source claims the word "scacol," describes a "tongue of land."

Early Origins of the Shackelford family

The surname Shackelford was first found in Lancashire where Hugh Schacheliton was listed in the Assize Rolls for 1246. Hugh Shakeldene was found in the Subsidy Rolls for Yorkshire in 1302. [1]

"The Shackletons were one of the most notable Quaker families in Ireland. Their famous school at Ballitore, Co. Kildare, where Edmund Burke was educated, was founded by Abraham Shackleton, a native of Yorkshire, in 1726. His son Richard Shackleton and his grandson Abraham Shackleton carried on the school with success. His daughter, Mary Leadbeater (1726-1826), the author of poems and essays, left a valuable account of rural life in the eighteenth century. Sir Ernest Shackleton (1874-1922), the Antarctic explorer, was of the same Co. Kildare family." [4]

The Shackell variant has the same root and "is derived from the name of an ancestor. 'the son of Shakell'; compare the local Shackleton." [5] The Yorkshire Poll Tax Rolls of 1379 include Willelmus Shakelle. [5]

In Norfolk, The Vicarage of Corpesty, Norfolk, 'was sold by Heydon to Thomas Jecks and John Shakle, and by them to the Bacons, 1611.' [6] "This form still remains in Norfolk, Shackle being found in the Modern Domesday Book for that county." [5]

Early History of the Shackelford family

Spelling variations of this family name include: Shackleton, Shackle, Sheckleton and others.

Notables of this surname at this time include: Abraham Shackleton (1697-1771), English schoolmaster, the youngest of six children, was born at Shackleton House, near Bingley in the West Riding of Yorkshire. His parents were Quakers. He moved to Ireland, and became a tutor to the children of...
Another 47 words (3 lines of text) are included under the topic Early Shackelford Notables in all our PDF Extended History products and printed products wherever possible.

In the United States, the name Shackelford is the 2,948th most popular surname with an estimated 9,948 people with that name. [7]

Migration of the Shackelford family to Ireland

Some of the Shackelford family moved to Ireland, but this topic is not covered in this excerpt.
Another 64 words (5 lines of text) about their life in Ireland is included in all our PDF Extended History products and printed products wherever possible.

Shackelford migration to the United States +

Shackelford Settlers in United States in the 20th Century