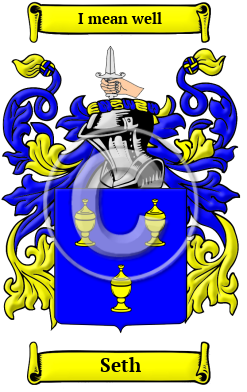 Seth was first used as a surname among the descendants of the ancient Scottish people known as the Picts. It was a name for a person who shared some of the qualities attributed to a wolf. Seth is a nickname surname, which belongs to the category of hereditary surnames. Nicknames form a broad and miscellaneous class of surnames, and can refer directly or indirectly to one's personality, physical attributes, mannerisms, or even their habits of dress. The surname Seth is derived from the Gaelic first name Sithech, which means wolf.

Early Origins of the Seth family

The surname Seth was first found in Perthshire (Gaelic: Siorrachd Pheairt) former county in the present day Council Area of Perth and Kinross, located in central Scotland, where the family appears to have been firmly entrenched in the Eastern coastal regions well before 1000 AD.

While some claim that the Clan originally descended from a MacDuff, one of the ancient Earls of Fife, the first official mention in documents shows them to be present at the General Council held by King Malcolm at Forfar in 1061.

However, this ancient leadership was challenged by many other Clans Commyns (Cummings) who had leased the Shaw lands of Rothiemurchus.

Early History of the Seth family

Before the first dictionaries appeared in the last few hundred years, scribes spelled according to sound. spelling variations are common among Scottish names. Seth has been spelled Shaw, Shawe, Mac Ghille-Sheathanaich (Gaelic) and others.

Notable amongst the Clan at this time was Robert Shaw (died 1527), Scottish cluniac monk and prelate; William Schawe (1550-1602), Scottish architect, probably a younger son of Schaw of Sauchie; John Shawe or Shaw (1608-1672), an English puritan minister from Yorkshire...
Another 41 words (3 lines of text) are included under the topic Early Seth Notables in all our PDF Extended History products and printed products wherever possible.

Migration of the Seth family to Ireland

Some of the Seth family moved to Ireland, but this topic is not covered in this excerpt.
Another 123 words (9 lines of text) about their life in Ireland is included in all our PDF Extended History products and printed products wherever possible.

Seth migration to the United States +

In those unstable times, many had no choice but to leave their beloved homelands. Sickness and poverty hounded travelers to North America, but those who made it were welcomed with land and opportunity. These settlers gave the young nations of Canada and the United States a strong backbone as they stood up for their beliefs as United Empire Loyalists and in the American War of Independence. In this century, the ancestors of these brave Scots have begun to recover their illustrious heritage through Clan societies and other heritage organizations. Early passenger and immigration lists reveal many Scottish settlers bearing the name Seth:

Seth Settlers in United States in the 17th Century

Seth Settlers in Australia in the 19th Century