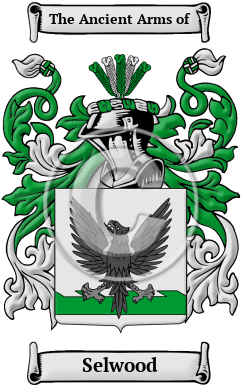 Early Origins of the Selwood family

The surname Selwood was first found in Somerset at Selwood which dates back to c. 894 where it was listed as Seluudu and probably meant "wood where swallow-trees grow." [1]

Early History of the Selwood family

This web page shows only a small excerpt of our Selwood research. Another 127 words (9 lines of text) covering the years 1189, 1339, 1700 and 1773 are included under the topic Early Selwood History in all our PDF Extended History products and printed products wherever possible.

More information is included under the topic Early Selwood Notables in all our PDF Extended History products and printed products wherever possible.

Selwood migration to the United States +

Selwood Settlers in United States in the 17th Century

Selwood Settlers in United States in the 18th Century

Selwood Settlers in United States in the 19th Century

Selwood Settlers in Canada in the 20th Century

Selwood Settlers in Australia in the 19th Century

Selwood Settlers in New Zealand in the 19th Century

Selwood Settlers in West Indies in the 18th Century