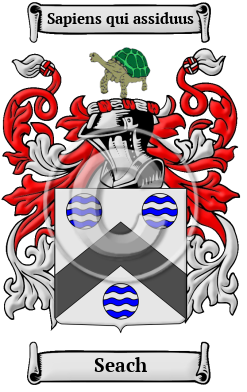 The name Seach is of Anglo-Saxon origin and came from when the family lived in the county of Cumberland. Seach is a topographic surname, which was given to a person who resided near a physical feature such as a hill, stream, church, or type of tree. During the Middle Ages, as society became more complex, individuals needed a way to be distinguishable from others. Toponymic surnames were developed as a result of this need. Various features in the area or landscape were used to distinguish people from one another. In this case the original bearers of the surname Seach were named due to their close proximity to a marshy stream or damp gully. The surname was originally derived from Sikes-Dyke near Carlisle in Cumberland.

Early Origins of the Seach family

The surname Seach was first found in Cumberland at Sikes-Dyke. Another branch of the family was found in the parish of Sledmere in the East Riding of Yorkshire.

"Sledmere House, a spacious mansion of stone, the seat of Sir Tatton Sykes, Bart., is seated near the foot of an acclivity, in a beautiful and finely-wooded park, south of the village; it was built by Sir Christopher, the second Baronet, from his own designs, and was improved and enriched by his son, the late Sir Mark Masterman Sykes, brother of the present Baronet. Sledmere Castle, on the east side of the park, is a modern edifice. The living is a perpetual curacy, in the patronage of Sir Tatton. The church, which stands within the park, is a neat fabric, consisting of a nave, chancel, and square tower, and containing some handsome monuments to the Sykes family." [1]

Again in the East Riding of Yorkshire, we found another record of the family at Wintringham. "The farm of Linton, the property of Sir Tatton Sykes, was the site of a monastic cell subordinate to the abbey of Scarborough." [1]

Early History of the Seach family

This web page shows only a small excerpt of our Seach research. Another 110 words (8 lines of text) covering the years 1684, 1756, 1713, 1714 and 1714 are included under the topic Early Seach History in all our PDF Extended History products and printed products wherever possible.

It is only in the last few hundred years that the English language has been standardized. For that reason, early Anglo-Saxon surnames like Seach are characterized by many spelling variations. As the English language changed and incorporated elements of other European languages, even literate people changed the spelling of their names. Scribes and monks in the Middle Ages spelled names they sounded, so it is common to find several variations that refer to a single person. The variations of the name Seach include: Sikes, Sykes, Sykkes, Sikkes, Syks, Siks, Sike and many more.

Notables of this surname at this time include: Arthur Ashley Sykes (1684-1756), an English latitudinarian divine, born in London, son of Arthur Sykes of Ardeley, near Stevenage, Hertfordshire. " On 7 Feb...
Another 32 words (2 lines of text) are included under the topic Early Seach Notables in all our PDF Extended History products and printed products wherever possible.

Seach migration to the United States +

Many English families tired of political and religious strife left Britain for the new colonies in North America. Although the trip itself offered no relief - conditions on the ships were extremely cramped, and many travelers arrived diseased, starving, and destitute - these immigrants believed the opportunities that awaited them were worth the risks. Once in the colonies, many of the families did indeed prosper and, in turn, made significant contributions to the culture and economies of the growing colonies. An inquiry into the early roots of North American families has revealed a number of immigrants bearing the name Seach or a variant listed above:

Seach Settlers in United States in the 20th Century

Seach Settlers in Australia in the 19th Century

Motto: Sapiens qui assiduus
Motto Translation: He is wise who is industrious.