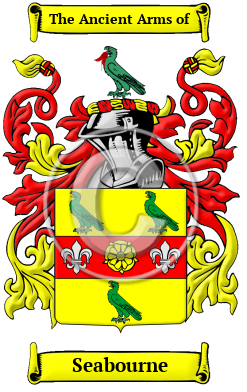 Early Origins of the Seabourne family

The surname Seabourne was first found in Huntingdonshire where early Latin forms of the name were found, specifically Sabernus Monachus and Philippus filius Seberni who were listed there 1114-1130. A few years later, Margareta filia Seberni, was found in the Curia Regis Rolls of the Isle of Man in 1207 and John Sebern was found in Bury St. Edmunds, Suffolk in 1190. Sayer Sabarn was recorded in the Subsidy Rolls for Essex in 1327 and fifty years later, John Sabern was listed there in the Assize Rolls of 1377. [5]

Early History of the Seabourne family

More information is included under the topic Early Seabourne Notables in all our PDF Extended History products and printed products wherever possible.

Seabourne migration to the United States +

Seabourne Settlers in United States in the 17th Century

Seabourne Settlers in New Zealand in the 19th Century