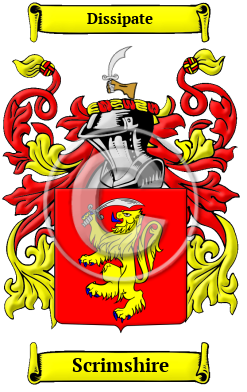 Some surnames are derived from the occupation of the person who first held the name. Scrimshire is most likely such a name, referring to one who was a fencing-master, coming from the old French "eskermisseour", meaning "fencer" and which came in turn from the old high German word "skirmen", which meant "to defend". Such fencing-masters always found plentiful employment in medieval Europe, though they were officially banned from some large cities, such as London, because they could be a dangerous influence on others. Notice the similarities between the name Scrimshire and the modern English word "skirmisher".

Scrimshaw is the name given to scrollwork, engravings, and carvings done in bone or ivory. No one known why this name was attributed to whalers who spent their leisure time carving such works.

Early Origins of the Scrimshire family

The surname Scrimshire was first found in Fife, where some records speak of a Clan Scrymgeour, who held the position of hereditary standard-bearers of Scotland.

One of them, known originally as Alexander, son of Colyn, son of Carun, obtained in 1293 a lease of the land or Torr from Thomas de Kylmaron for his services in this position of standard-bearer.

By 1298, Alexander had adopted the name 'Skirmeschur' and had a charter for some lands near Dundee from Sir William Wallace, Guardian of the Kingdom. Along with the lands came the title of Constable of the Castle of Dundee and this became a hereditary office of the Chief of the Scrimgeours.

Eight years later, he was taken as a prisoner of war and was hung at Newcastle-on-Tyne on the express orders of Edward I.

Early History of the Scrimshire family

Notable amongst the family at this time was Henry Scrimgeour or Scrymgeour (c. 1505-1572), Scottish born diplomat and book collector John Scrimgeour of Myres Castle, Fife was Master of Work for royal buildings for James V and Mary, Queen of Scots, and Precentor of the Scottish Chapel Royal fl 1538. John Scrymgeour, 3rd Viscount Dudhope and 1st Earl of Dundee (d. 1668), was a Scottish peer who fought in the Wars of the Three Kingdoms. Sir James Scrymgeour (1550?-1612), of Dudhope, "Constable of Dundee, was descended from Sir Alexander Carron, called 'Skirmisheour,' who was standard-bearer to Alexander I (1106-1124), an office still held...
Another 116 words (8 lines of text) are included under the topic Early Scrimshire Notables in all our PDF Extended History products and printed products wherever possible.

Scrimshire Settlers in Australia in the 19th Century