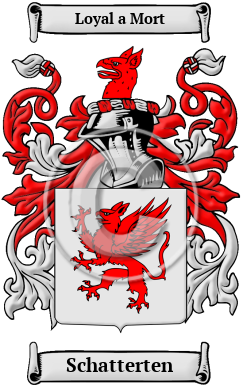 The ancestors of the bearers of the Schatterten family name are thought have lived in ancient Anglo-Saxon England. They were first found in Chadderton, or Catterton which had two locations. The first in the parish of Oldham in the county of Lancashire, the second, a township in the parish of Healaugh in the West Riding of Yorkshire. The place-name is derived from the Latin word Cathedra, which means the place by the hill. [1]

Early Origins of the Schatterten family

The surname Schatterten was first found in Lancashire where "in the 13th century, a Richard de Trafford gave lands of the name Chadderton to his son Geoffrey (circa 1235-1332) who adopted the name of the estate, becoming Geoffrey de Chadderton. Possession of the manor left the family when Margery, a daughter and heir of Chadderton Manor, married a John de Radcliffe in circa 1367. Chadderton Hall was the birthplace of Dr. Laurence Chadderton, an eminent divine at the period of the Reformation, of which he was a zealous promoter; he lived to the great age of 103 years, and died at Cambridge on the 16th November, 1640. " [3]

Early History of the Schatterten family

Until quite recently, the English language has lacked a definite system of spelling rules. Consequently, Anglo-Saxon surnames are characterized by a multitude of spelling variations. Changes in Anglo-Saxon names were influenced by the evolution of the English language, as it incorporated elements of French, Latin, and other languages. Although Medieval scribes and church officials recorded names as they sounded, so it is common to find one person referred to by several different spellings of his surname, even the most literate people varied the spelling of their own names. Variations of the name Schatterten include Chatterton, Chadderton, Chatherton, Chaderton and others.

Distinguished members of the family include Laurence Chaderton (c.1536-1640), Puritan divine, first master of Emmanuel College in 1584, who was among the translators of the King James Version of the Bible. he was the son of Thomas Chaderton of the Lees, Oldham. "According to his biographers, he gave inconsistent accounts of his age. According to one, he was born in 1536; according to the other, two years later. His father was a gentleman of good means, and seems to have taken little pains to press Laurence forward in his education. The boy was further disgusted with study by the severity of...
Another 141 words (10 lines of text) are included under the topic Early Schatterten Notables in all our PDF Extended History products and printed products wherever possible.

Migration of the Schatterten family to Ireland

Some of the Schatterten family moved to Ireland, but this topic is not covered in this excerpt.
Another 55 words (4 lines of text) about their life in Ireland is included in all our PDF Extended History products and printed products wherever possible.

Migration of the Schatterten family

Searching for a better life, many English families migrated to British colonies. Unfortunately, the majority of them traveled under extremely harsh conditions: overcrowding on the ships caused the majority of the immigrants to arrive diseased, famished, and destitute from the long journey across the ocean. For those families that arrived safely, modest prosperity was attainable, and many went on to make invaluable contributions to the development of the cultures of the new colonies. Research into the origins of individual families in North America revealed records of the immigration of a number of people bearing the name Schatterten or a variant listed above: N. Chadderton who arrived in San Francisco in 1850; John Chatterton with his brother David arrived in Philadelphia in 1828; Henry Chatterton arrived in New York in 1822.