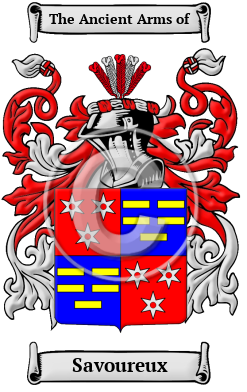 Early Origins of the Savoureux family

The surname Savoureux was first found in Gascony (French: Gascogne), an area of southwest France bordering Spain, that was part of the "Province of Guyenne and Gascony" prior to the French Revolution, where the family held a family seat in early times.

The members of this distinguished family were also established in other regions. The branch Sabouraud was established in Limousin, the branch Saboureau in Poitou, and the branch Savourey in Burgundy. Several members of the family distinguished themselves through their respective achievements, such as Charles-François Saboureux de la Bonneterie, a lawyer who died in Paris in 1781. Among his written works was "Constitution des Jésuites" (1762).

Early History of the Savoureux family

This web page shows only a small excerpt of our Savoureux research. Another 29 words (2 lines of text) covering the years 1762 and 1781 are included under the topic Early Savoureux History in all our PDF Extended History products and printed products wherever possible.

More information is included under the topic Early Savoureux Notables in all our PDF Extended History products and printed products wherever possible.

Migration of the Savoureux family

Some of the first settlers of this family name or some of its variants were: Jean Sabourin, originally from Montalembert in Deux-Sèvres, who settled in the diocese of La Rochelle, where he married Marie Gaillard around 1666.