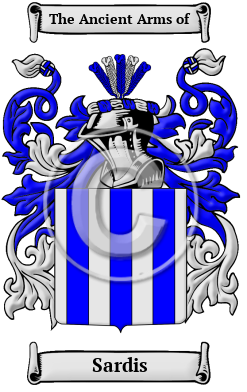 The prestigious surname Sardis comes from the region of Provence, in France. The surname Sardis is of local origin, and is therefore a type of hereditary surname. Local surnames are derived either from an already existing place-name or from a local feature of the geography.

Early Origins of the Sardis family

The surname Sardis was first found in Provence, where this distinguished family held a family seat from ancient times.

Early History of the Sardis family

Notable amongst the names at this time was Hubert Le Sueur (c.1580-1658), a French sculptor with the contemporaneous reputation of having trained in Giambologna's Florentine workshop; Balthazard Sarde, Chief Auditor in the Audit Office in 1622; Jean Le...
Another 37 words (3 lines of text) are included under the topic Early Sardis Notables in all our PDF Extended History products and printed products wherever possible.

Sardis migration to the United States +

Sardis Settlers in United States in the 18th Century

Sardis Settlers in United States in the 19th Century