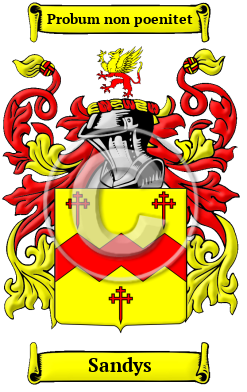 In ancient Anglo-Saxon England, the ancestors of the Sandys surname lived in the residence that was near the sands. Sandys is a topographic surname, which was given to a person who resided near a physical feature such as a hill, stream, church, or type of tree. During the Middle Ages people were very conscious of the variations in their surroundings including the soil types. In this case the original bearers of the surname Sandys were named due to their close proximity to the sands.

Early Origins of the Sandys family

The surname Sandys was first found in Worcestershire at Wickhamford, a parish, in the union of Evesham, Upper division of the hundred of Blackenhurst. "The church [of Wickhamford] is an exceedingly neat edifice, with a simple unpretending tower which rises prettily above the trees that environ it: in the chancel are two enriched altar-tombs with effigies in alabaster, in memory of the Sandys family, whose descendant, Lord Sandys, in 1841 repaired the entire church." [1] "About a mile from the church [of Woodham-Ferris in Essex] is Edwin Hall, a handsome mansion erected by Edwin Sandys, Archbishop of York." [1]

"At Lanarth, [in the parish of St. Keverne, Cornwall] which has been in possession of the Sandys family upwards of a century, an elegant house has been lately built by its present proprietor Lieutenant Colonel William Sandys, who spent the spring of his life in India, in those active scenes which mark and diversify the military occupation. His house, gardens, and grounds, have been raised to their present state of perfection at a vast expence; and they include every convenience which a retired situation can be expected to secure." [2]

Early History of the Sandys family

It is only in the last few hundred years that the English language has been standardized. For that reason, early Anglo-Saxon surnames like Sandys are characterized by many spelling variations. As the English language changed and incorporated elements of other European languages, even literate people changed the spelling of their names. The variations of the name Sandys include: Sandys, Sands, Sandy and others.

Migration of the Sandys family to Ireland

Some of the Sandys family moved to Ireland, but this topic is not covered in this excerpt. More information about their life in Ireland is included in all our PDF Extended History products and printed products wherever possible.

Sandys migration to the United States +

Many English families tired of political and religious strife left Britain for the new colonies in North America. Although the trip itself offered no relief - conditions on the ships were extremely cramped, and many travelers arrived diseased, starving, and destitute - these immigrants believed the opportunities that awaited them were worth the risks. Once in the colonies, many of the families did indeed prosper and, in turn, made significant contributions to the culture and economies of the growing colonies. An inquiry into the early roots of North American families has revealed a number of immigrants bearing the name Sandys or a variant listed above:

Sandys Settlers in United States in the 17th Century

Sandys Settlers in Australia in the 19th Century

Sandys Settlers in New Zealand in the 19th Century

Motto: Probum non poenitet
Motto Translation: We do not repent of what is good.