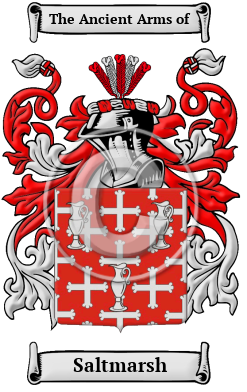 The origins of the Saltmarsh name lie with England's ancient Anglo-Saxon culture. It comes from when the family lived in the township of Saltmarsh which was in the parish of Howden in the West Riding of Yorkshire. Saltmarsh is a topographic surname, which was given to a person who resided near a physical feature such as a hill, stream, church, or type of tree. During the Middle Ages people were very conscious of the variations in their surroundings including the soil types. In this case the original bearers of the surname Saltmarsh were named due to their close proximity to a salt marsh.

Early Origins of the Saltmarsh family

The surname Saltmarsh was first found in Yorkshire where the first record of the name was William Saltmarsh, Latinized De Salso Marisco, witnessed a grant of Richard Strongbow in the 12th century. Sir Richard Saltmarsh was one of the knights of that shire 17. Edward II. [1]

Saltmarsh is a township, in the parish and union of Howden, wapentake of Howdenshire, in the East Riding of Yorkshire. "The Hall is a handsome stone mansion, with a well-wooded lawn and pleasure-grounds, the seat of the Saltmarsh family." [2]

Early History of the Saltmarsh family

This web page shows only a small excerpt of our Saltmarsh research. Another 66 words (5 lines of text) covering the years 1647, 1639, 1646 and 1647 are included under the topic Early Saltmarsh History in all our PDF Extended History products and printed products wherever possible.

Before the last few hundred years, the English language had no fast system of spelling rules. For that reason, spelling variations are commonly found in early Anglo-Saxon surnames. Over the years, many variations of the name Saltmarsh were recorded, including Saltmarsh, Saltmarshe and others.

Notables of this surname at this time include: John Saltmarsh (d. 1647), English mystical writer, of an old Yorkshire family, and a native of Yorkshire. Leaving the university, he became (about 1639) rector of Heslerton, Yorkshire. In 1646 Saltmarsh became an army chaplain, attached to the fortunes of Sir Thomas Fairfax. "On Saturday, 4 Dec. 1647, rousing himself from what he deemed a trance, he left his abode at Caystreet, near Great Ilford, Essex, and...
Another 75 words (5 lines of text) are included under the topic Early Saltmarsh Notables in all our PDF Extended History products and printed products wherever possible.

Saltmarsh migration to the United States +

To escape oppression and starvation at that time, many English families left for the "open frontiers" of the New World with all its perceived opportunities. In droves people migrated to the many British colonies, those in North America in particular, paying high rates for passages in cramped, unsafe ships. Although many of the settlers did not make the long passage alive, those who did see the shores of North America perceived great opportunities before them. Many of the families that came from England went on to make essential contributions to the emerging nations of Canada and the United States. Research into various historical records revealed some of first members of the Saltmarsh family emigrate to North America:

Saltmarsh Settlers in United States in the 18th Century

Saltmarsh Settlers in United States in the 19th Century

Saltmarsh Settlers in Australia in the 19th Century

Saltmarsh Settlers in New Zealand in the 19th Century

Saltmarsh Settlers in West Indies in the 17th Century

Historic Events for the Saltmarsh family +