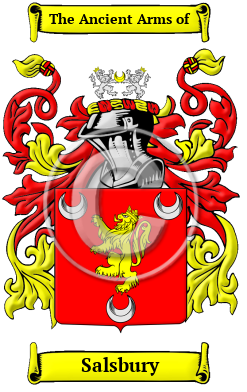 Salsbury is one of the names that was brought to England in the wave of migration following the Norman Conquest of 1066. The Salsbury family lived in Wiltshire, at Salisbury, from where their name is derived.

Early Origins of the Salsbury family

The surname Salsbury was first found in Wiltshire at Salisbury, a cathedral city that dates back to c. 900 when it was listed as Searobyrg. Over one hundred years later, the Domesday Book lists the place name as Sarisberie, much closer phonetically to today's name. The place name literally means "stronghold at Sorvio, " from the Old English words burgh + the Celtic name Sorviodunum. [1]

Salisbury Cathedral is one of the most famous cathedrals in Britain; its spire can be seen for miles. Moreover, it is now home to pages from the Magna Carta which is on public display.

"Edward de Sarisberie, sometimes called Edward Vicecomes was a great tenant in chief in Wiltshire and other counties, at the making of the Domesday [Book]. He was a younger son of Walter de Evreux (Devereux) one of the few instances in those early times of a Norman family with a Saxon name. " [2]

Early History of the Salsbury family

Before English spelling was standardized a few hundred years ago, spelling variations of names were a common occurrence. Elements of Latin, Norman French and other languages became incorporated into English throughout the Middle Ages, and name spellings changed even among the literate. The variations of the surname Salsbury include Salisbury, Salesbury, Sallsbury, Salusbury and many more.

Outstanding amongst the family at this time was Henry Salisbury or Salebury 1561-1637?), Welsh grammarian, born in 1561 at Dolbelidr (now known as Ffynonfair) in the parish of Henllan, Denbighshire probably the youngest son of Foulke, third son of Piers Salesbury of Bachymbyd and Rug, a branch of the Salesburys of Llewenny, Denbighshire; John Salisbury (1500?-1573), Welsh Bishop of Sodor and Man, member of the ancient family settled at Llewenny in Denbighshire, whose name was frequently spelt Salesbury or Salusbury; John Salisbury (1575-1625), Jesuit and Welsh scholar, described as a native of Merionethshire, presumably a member of the...
Another 97 words (7 lines of text) are included under the topic Early Salsbury Notables in all our PDF Extended History products and printed products wherever possible.

In the United States, the name Salsbury is the 11,963rd most popular surname with an estimated 2,487 people with that name. [3]

Migration of the Salsbury family to Ireland

Some of the Salsbury family moved to Ireland, but this topic is not covered in this excerpt. More information about their life in Ireland is included in all our PDF Extended History products and printed products wherever possible.

Salsbury migration to the United States +

In England at this time, the uncertainty of the political and religious environment of the time caused many families to board ships for distant British colonies in the hopes of finding land and opportunity, and escaping persecution. The voyages were expensive, crowded, and difficult, though, and many arrived in North America sick, starved, and destitute. Those who did make it, however, were greeted with greater opportunities and freedoms that they could have experienced at home. Many of those families went on to make important contributions to the young nations in which they settled. Early immigration records have shown some of the first Salsburys to arrive on North American shores:

Salsbury Settlers in United States in the 17th Century

Salsbury Settlers in United States in the 18th Century

Salsbury Settlers in United States in the 19th Century

Salsbury Settlers in Australia in the 19th Century