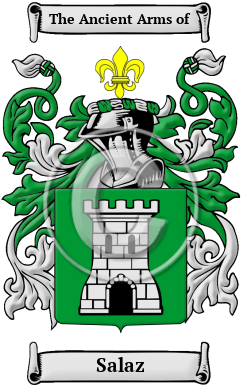 Salazar is a locality in the municipality of Villarcayo de Merindad de Castilla la Vieja, in the comarca of Las Merindades, in the province of Burgos, in the autonomous community of Castile and León, Spain. Salazarese (locally Zaraitzuko uskara) is the Basque dialect of the Salazar Valley of Navarre, Spain.

Early Origins of the Salaz family

The surname Salaz was first found in Castile, where the family held a family seat from the early Middle Ages. During the 10th century, the surname appears in Navarre, where it extensively spread including into the eponymous Salazar Valley, a valley in the east of the Foral Community of Navarre in Spain.

Early History of the Salaz family

Spelling variations of this family name include: Salazar, Salaz and others.

Notable bearers of the family name Salaz were sixteenth century soldier and writer Diego de Salazar; sixteenth century writer Eugenio Salazar de Alarcón, who also served as Governor of the Canary Islands, and as a judicial official in Guatemala and Mexico; Felipe Alberto Salazar, treasurer to King Philip II in 1618; seventeenth century Spanish writer Ambrosio de Salazar; Hernando de Salazar, confessor and financial advisor to the Count-Duke of Olivares in the...
Another 71 words (5 lines of text) are included under the topic Early Salaz Notables in all our PDF Extended History products and printed products wherever possible.

Migration of the Salaz family

Some of the first settlers of this family name or some of its variants were: Juan de Salazar, a knight of the Order of Santiago who accompanied Pedro de Mendoza to the Río de la Plata, then continued to Paraguay where he founded the city of Asunció.