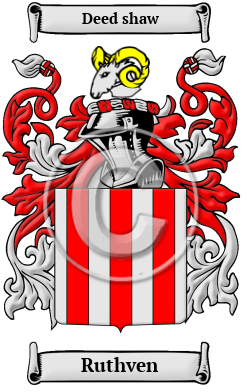 Early Origins of the Ruthven family

The surname Ruthven was first found in Angus (Gaelic: Aonghas), at Ruthven, a parish in the Tayside region of northeastern Scotland, and present day Council Area of Angus, formerly known as Forfar or Forfarshire. This noble Scottish family claims to trace its ancestry to Thor, the Scandinavian, who settled in Scotland in the reign of David I (12th C.) [1] It is thought that they held the Barony of Ruthven in Angus about 1050, and then branched into Perthshire.

Early History of the Ruthven family

Migration of the Ruthven family to Ireland

Some of the Ruthven family moved to Ireland, but this topic is not covered in this excerpt.
Another 86 words (6 lines of text) about their life in Ireland is included in all our PDF Extended History products and printed products wherever possible.

Ruthven migration to the United States +

Ruthven Settlers in United States in the 18th Century

Ruthven Settlers in United States in the 19th Century

Ruthven Settlers in United States in the 20th Century

Ruthven Settlers in Canada in the 19th Century

Ruthven Settlers in Australia in the 19th Century

Ruthven Settlers in New Zealand in the 19th Century