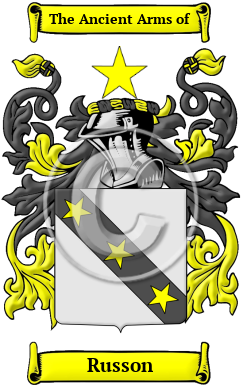 The distinguished surname Russon is Anglo-Saxon in origin. It is derived from "Ross," a personal name thought to be Germanic in origin, and refers to "a son of Ross."

Early Origins of the Russon family

The surname Russon was first found in the county of Huntingdonshire, where the Russon family held a family seat from early times. The first bearer of the name was Peter Russessone, who was recorded in 1308.

Early History of the Russon family

This web page shows only a small excerpt of our Russon research. Another 72 words (5 lines of text) covering the years 1308, 1342, and 1365 are included under the topic Early Russon History in all our PDF Extended History products and printed products wherever possible.

Spelling variations of this family name include: Russon, Russom, Russesone, Russessone, Rozzossone and many more.

More information is included under the topic Early Russon Notables in all our PDF Extended History products and printed products wherever possible.

Russon Settlers in Australia in the 19th Century