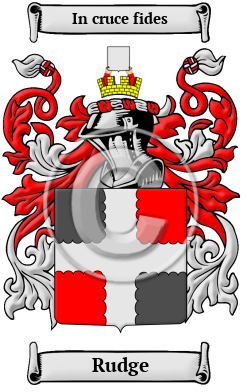 The ancestors of the name Rudge date back to the days of the Anglo-Saxon tribes of Britain. The name is derived from their residence near a ridge. Also, some examples of the name are of nickname derivation. This makes Rudge a classic example of an English polygenetic surname, which is a surname that was developed in a number of different locations and adopted by various families independently. The local variant of the surname is derived from the Old English word hrycg, which means ridge. In Old English, thish word became rugge, regge, and rigge in various dialects of the language. The surname Rudge is derived from the rugge variant of the word. The nickname variant is derived from the Anglo French word rugge (rouge in Modern French) which means red, and would have been the nickname of someone with brilliant red hair.

Early Origins of the Rudge family

The surname Rudge was first found in Shropshire at Rudge, a township, in the parish of Pattingham. "The surname is doubtless derived from a township in Shropshire so called. " [1] The place name was listed in the Domesday Book of 1086 as Rigge [2] and was derived from the Old English word "hrycg" which means "place at the ridge." [3] There are few other places named Rudge in Britain, specifically in the counties Devon, Wiltshire and Somerset and all are very small locals and have remained small through the centuries. An early member of the family was John de Rugge, of Seysdon, Staffordshire who was living, 17 Edward II.

Early History of the Rudge family

This web page shows only a small excerpt of our Rudge research. Another 97 words (7 lines of text) covering the years 1320 and 1637 are included under the topic Early Rudge History in all our PDF Extended History products and printed products wherever possible.

Rudge has been spelled many different ways. Before English spelling became standardized over the last few hundred years, spelling variations in names were a common occurrence. As the English language changed in the Middle Ages, absorbing pieces of Latin and French, as well as other languages, the spelling of people's names also changed considerably, even over a single lifetime. Many variations of the name Rudge have been found, including Rudge, Ruidge, Roidge, Rutdge, Rutge, Rudych, Rutch, Rutche, Ruitge and many more.

More information is included under the topic Early Rudge Notables in all our PDF Extended History products and printed products wherever possible.

Rudge migration to the United States +

In an attempt to escape the chaos experienced in England, many English families boarded overcrowded and diseased ships sailing for the shores of North America and other British colonies. Those families hardy enough, and lucky enough, to make the passage intact were rewarded with land and a social environment less prone to religious and political persecution. Many of these families became important contributors to the young colonies in which they settled. Early immigration and passenger lists have documented some of the first Rudges to arrive on North American shores:

Rudge Settlers in United States in the 17th Century

Rudge Settlers in United States in the 19th Century

Rudge Settlers in United States in the 20th Century

Rudge Settlers in Australia in the 19th Century

Rudge Settlers in West Indies in the 17th Century

Motto: In cruce fides
Motto Translation: Faith in the cross.