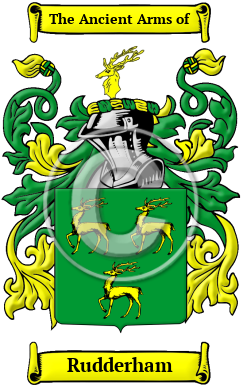 Rudderham is a name whose history on English soil dates back to the wave of migration that followed the Norman Conquest of England of 1066. The Rudderham family lived in the West Riding of Yorkshire at Rotherham, a market-town and parish, and the head of a union, in the north division of the wapentake of Strafforth and Tickhill. The place name literally means "homestead or village on the River Rother," [1] "The town was formerly celebrated for its manufacture of edge tools; and in 1160, there were mines of ironstone, smelting-furnaces, and forges in the neighbourhood." [2] The local was named Rodreham in the Domesday Book. [3]

Early Origins of the Rudderham family

The surname Rudderham was first found in Yorkshire where they were Lords of the Manor of Rotherham. Conjecturally they are descended from the Count of Mortain who held the lands and village of Rotherham at the taking of the Domesday Book in the year 1086, a census initiated by Duke William of Normandy after his conquest of England. The hamlet of Rotherham consisted mainly of one single Church.

Early History of the Rudderham family

A multitude of spelling variations characterize Norman surnames. Many variations occurred because Old and Middle English lacked any definite spelling rules. The introduction of Norman French to England also had a pronounced effect, as did the court languages of Latin and French. Therefore, one person was often referred to by several different spellings in a single lifetime. The various spellings include Rotherham, Rotheram, Rothram, Rudrum, Rudderham and others.

Outstanding amongst the family at this time was Caleb Rotheram (1694-1752), English dissenting minister and tutor, born at Great Salkeld, Cumberland. Sir John Rotheram (1630-1696), was an English lawyer, son of Thomas Atwood Rotherham, vicar of Pirton, Hertfordshire, and of Boreham, Essex...
Another 42 words (3 lines of text) are included under the topic Early Rudderham Notables in all our PDF Extended History products and printed products wherever possible.

Migration of the Rudderham family to Ireland

Some of the Rudderham family moved to Ireland, but this topic is not covered in this excerpt.
Another 32 words (2 lines of text) about their life in Ireland is included in all our PDF Extended History products and printed products wherever possible.

Rudderham migration to the United States +

Many English families left England, to avoid the chaos of their homeland and migrated to the many British colonies abroad. Although the conditions on the ships were extremely cramped, and some travelers arrived diseased, starving, and destitute, once in the colonies, many of the families prospered and made valuable contributions to the cultures of what would become the United States and Canada. Research into the origins of individual families in North America has revealed records of the immigration of a number of people bearing the name Rudderham or a variant listed above:

Rudderham Settlers in United States in the 20th Century

Rudderham Settlers in Australia in the 19th Century