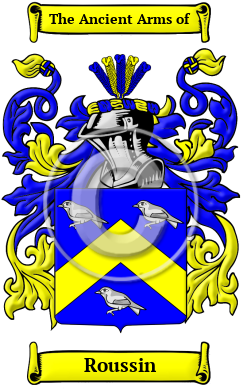 The name Roussin is an ancient French name that was given to a Languedoc person who was a person with a pleasant singing voice having derived from the Old French word rossinhol, meaning "nightingale."

Early Origins of the Roussin family

The surname Roussin was first found in Languedoc, where this illustrious family held a family seat since ancient times. The family has a long history as cryptographers and cryptanalysts, and from 1406, the word rossignol has served as the French term for "skeleton key."

Early History of the Roussin family

Notable amongst the family name at this time was the Rossignols, a family of French cryptographers and cryptanalysts. Antoine Rossignol (1600-1682), then a 26-year-old mathematician, had a local reputation for his interest in cryptography. When Henri II of Bourbon, Prince de Condé laid siege to the Huguenot city of Réalmont in 1626, he quickly broke a coded letter leaving the city pleading for more ammunition. The following day, a clear text version of the letter was presented to the commander of Réalmont with a demand for surrender. He quickly complied. Louis XIII's chief...
Another 93 words (7 lines of text) are included under the topic Early Roussin Notables in all our PDF Extended History products and printed products wherever possible.

Roussin Settlers in Canada in the 17th Century

Roussin Settlers in Canada in the 18th Century