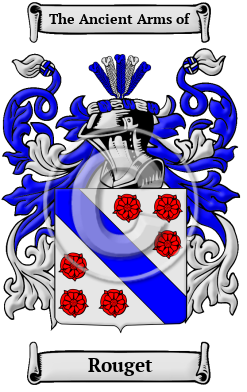 Early Origins of the Rouget family

The surname Rouget was first found in Savoy (French: Savoie) in the Rhône-Alpes region of the French Alps, where the family has held a family seat since very early times.

Throughout the centuries this ancient family expanded, developed and grew in size and influence. Noble François Roget was awarded the title of Lord of Fesson in recognition of the large contribution to his region and had his nobility confirmed and recorded in 1620. The family moved and eventually branched out to Annecy.

Nobles among this acclaimed family were François Roget and Mathieu Roget who lived in Annecy in 1622. As reward for his extensive involvement in the social, political and cultural affairs of his community, Jacques Philibert was created Lord of Chollex and was mentioned in 1700. Among the famous members of this ancient family was Louis, Lord of Andruéjols and of Roziers. Through his marriage with Isabelle de La Fagette, heiress of the house of La Fagette, the family acquired wealth and fame.

Due to their great influence and participation in the affairs of Gévaudan, descendants of this ancient family were granted titles such as Lords of La Fagette and had their nobility confirmed and recorded till the end of the 17th century.

Early History of the Rouget family

Notable in the family name at this time was François Roger de Gaignières (1642-1715), French genealogist, antiquary and collector; Estienne Roger (1665-1722), a French printer and publisher who worked in the Netherlands; and Louis de...
Another 34 words (2 lines of text) are included under the topic Early Rouget Notables in all our PDF Extended History products and printed products wherever possible.

Rouget Settlers in New Zealand in the 19th Century