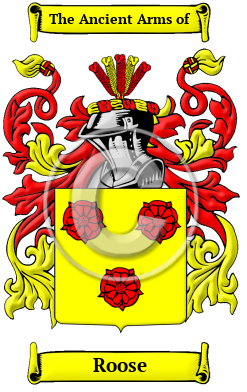 The ancient and distinguished surname Roose is derived from the Middle High German word "rose," meaning "a rose." The name may have been first borne by someone who lived near a rose garden, or by someone who lived in a house bearing the sign of the rose. Alternatively, the name may be of nickname origin, referring to someone with a "rosy" complexion. The surname is common in many European countries, including England, France, Belgium, and the Netherlands, as well as Germany, and can be found under a large number of spelling variations.

Early Origins of the Roose family

The surname Roose was first found in Silesia, where the name emerged in mediaeval times as one of the notable families of the region. From the 13th century the surname was identified with the great social and economic evolution which made this territory a landmark contributor to the development of the nation. The origins of the name make it likely that several branches of the family emerged independently during the Middle Ages; there are records dating from the 13th documenting the presence of the name Roose in Schleswig-Holstein, Pomerania, Alsace, Swabia, and Bohemia, as well as Silesia.

Early History of the Roose family

Notables of the period with the surname Roose were Johann Heinrich Roos (1631-1685), a German Baroque era landscape painter and etcher; Valentine Rose the elder (1736-1771) was the discoverer of "Rose's fusible metal." His son, Valentine Rose the younger (b.1762-1807), also made...
Another 42 words (3 lines of text) are included under the topic Early Roose Notables in all our PDF Extended History products and printed products wherever possible.

In the United States, the name Roose is the 15,061st most popular surname with an estimated 2,487 people with that name. [1]

Roose migration to the United States +

Roose Settlers in United States in the 17th Century

Roose Settlers in United States in the 18th Century

Roose Settlers in Canada in the 19th Century

Roose Settlers in Canada in the 20th Century

Roose Settlers in Australia in the 19th Century

Roose Settlers in New Zealand in the 19th Century