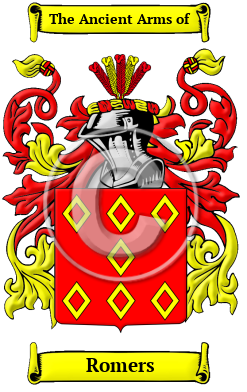 Early Origins of the Romers family

The surname Romers was first found in Lincolnshire where "the first of this name on record is Gerald de Romare, feudal lord of Bolingbroke whose son, William de Romare was in 1118 Governor of Newmarch, Normandy, and in arms against Hugh de Gournay, then in rebellion." [1]

"A castle was built [at Bolingbroke] by William de Romara, Earl of Lincoln, of which his descendant, Alicia de Lacey, was dispossessed by Edward II. Henry IV. was born in this fortress, and from it took the name of Henry of Bolingbroke: it was nearly demolished in the civil wars, the south-west tower being all that remains." [2]

William de Roumare (fl. 1140) Earl of Lincoln, "was son of Roger Fitzgerald and grandson of Gerald, steward of Duke William of Normandy, who about 1064 obtained a fief in the Roumois on condition of rendering service at Neufmarché-en-Lions." [3]

Early History of the Romers family

This web page shows only a small excerpt of our Romers research. Another 97 words (7 lines of text) covering the years 1142, 1296, 1680 and 1754 are included under the topic Early Romers History in all our PDF Extended History products and printed products wherever possible.

Spelling variations of this family name include: Romer, Romare, Romair, Romar and others.

More information is included under the topic Early Romers Notables in all our PDF Extended History products and printed products wherever possible.

Migration of the Romers family