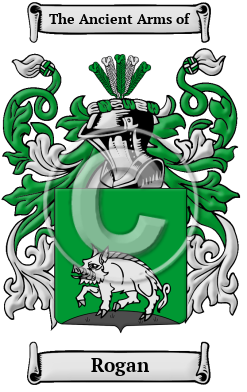 Early Origins of the Rogan family

The surname Rogan was first found in Armagh (Irish: Ard Mhacha) located in the province of Ulster in present day Northern Ireland, where they held a family seat as chiefs of great importance. In Gaelic, the name was Ó Ruadhagáin and was "an Oriel sept formerly of considerable importance." [1] The name is derived from "ruadh" meaning "red", so the surname can be translated as "red-haired." [2]

The family claim descent from the O'Hanlons, Lords of Orior, in the County Armagh and recognize this ancestry through a very similar Coat of Arms. Both have a green shield with a boar on a mound in the base of the shield. Specifically, the family claim descend through "Feig, son of Felim, who had a brother name Eachach, who was the ancestor of Rogan." [3]

Early History of the Rogan family

This web page shows only a small excerpt of our Rogan research. Another 61 words (4 lines of text) are included under the topic Early Rogan History in all our PDF Extended History products and printed products wherever possible.

More information is included under the topic Early Rogan Notables in all our PDF Extended History products and printed products wherever possible.

In the United States, the name Rogan is the 8,252nd most popular surname with an estimated 2,487 people with that name. [4]

Rogan migration to the United States +

Rogan Settlers in United States in the 17th Century

Rogan Settlers in United States in the 18th Century

Rogan Settlers in United States in the 19th Century

Rogan Settlers in Canada in the 19th Century

Rogan Settlers in Australia in the 19th Century

Rogan Settlers in New Zealand in the 19th Century

Historic Events for the Rogan family +