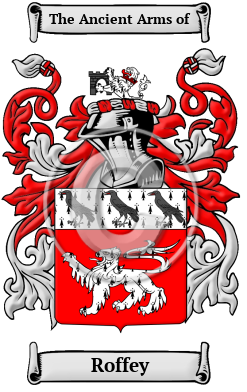 Roffey is a name that came to England in the 11th century wave of migration that was set off by the Norman Conquest of 1066. Roffey comes from the Norman given name Rudolph.

Early Origins of the Roffey family

The surname Roffey was first found in Norfolk where they held a family seat from early times, soon after the Norman Conquest by Duke William of Normandy in 1066 A.D.

Early History of the Roffey family

This web page shows only a small excerpt of our Roffey research. Another 148 words (11 lines of text) covering the years 1066, 1297, 1332, 1557, 1510 and 1521 are included under the topic Early Roffey History in all our PDF Extended History products and printed products wherever possible.

Before the last few hundred years the English language had no fixed system of spelling rules. For that reason, spelling variations occurred commonly in Anglo Norman surnames. Over the years, many variations of the name Roffey were recorded, including Roffe, Rolfe, Rolph, Roalph, Roff, Ruff, Rouf and others.

Outstanding amongst the family at this time was John Rough (died 1557), Scottish Protestant martyr, is stated to have been born in 1510, but as he was incorporated in St. Leonard's College in the university of St. Andrews in 1521. He was a close friend of John Knox and was soon summoned before Winram, the vicar-general of St. Andrews. Rough managed...
Another 60 words (4 lines of text) are included under the topic Early Roffey Notables in all our PDF Extended History products and printed products wherever possible.

Roffey Settlers in Australia in the 19th Century