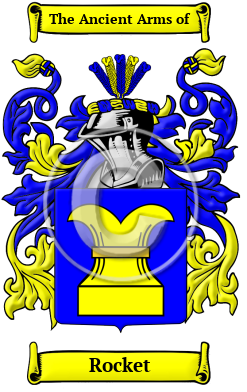 Early Origins of the Rocket family

The surname Rocket was first found in Languedoc, where the family has held a family seat since very early times.

By the 11th century this ancient family were established in the region of Languedoc where several of its members were most distinctive in their involvement in the community in which they lived. They were given titles, lands and letters of nobility as reward of their important contribution. The first member of the Roquette Family to be mentioned before 1090 was Hugues de Roquette, son-in-law of the Viscount of Albi and of Nîmes. In recognition of their outstanding involvement in the social, political and cultural affairs of their community many members of this ancient family were granted the titles of the Barons of Beauville and Lords of Auriac and of Magrens.

Early History of the Rocket family

This web page shows only a small excerpt of our Rocket research. Another 323 words (23 lines of text) covering the years 1161, 1229, 1333, 1669, 1788 and 1826 are included under the topic Early Rocket History in all our PDF Extended History products and printed products wherever possible.

Another 30 words (2 lines of text) are included under the topic Early Rocket Notables in all our PDF Extended History products and printed products wherever possible.

Rocket Settlers in Australia in the 19th Century