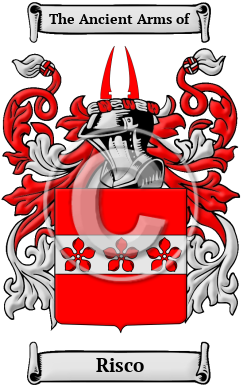 Cornwall, one of the original six "Celtic nations" is the homeland to the surname Risco. A revival of the Cornish language which began in the 9th century AD has begun. No doubt this was the language spoken by distant forebears of the Risco family. Though surnames became common during medieval times, English people were formerly known only by a single name. The way in which hereditary surnames were adopted in medieval England is fascinating. Many Cornish surnames appear to be topographic surnames, which were given to people who resided near physical features such as hills, streams, churches, or types of trees, many are actually habitation surnames. The name Risco is a local type of surname and the Risco family lived in Cornwall. Their name, however, derives from the Old Norse roscowe, meaning roe-buck-wood, and indicates that the original bearer lived near a stand of such timber.

Early Origins of the Risco family

The surname Risco was first found in Cornwall where they were Lords of the manor of Roscrowe. [1] There is some disagreement about the earliest reference of the name as one reference claims "I feel sure it is a Lancashire local surname, although I cannot find the spot." [2] This source continues on with the earliest record of Gilbert Roscoe, of Exton as recorded in the Wills at Chester in 1303. Continuing in the same register, he noted James Roscoe of Farnworth, in 1303 and James Roscow of Leigh in 1504. [2]

Back in Cornwall, Roscrowe is an estate in the parish of Gluvias in Cornwall which was held by the family in the 14th century and became extinct during the time of Henry I. [1]

"Roscrow, [in the parish of St. Gluvias] according to Hals, gave name to a family of gentlemen at a very early period, of whom it became and continued the seat, until the reign of Henry VI. when the family of Roscrow became extinct in the male line. According to Tonkin, Thomas Harry, who settled at this place, in the reign of Henry VIII. took the name of Roscrow, and in succeeding years his grandson sold the barton to Samuel Pendarves, Esq." [3]

Early History of the Risco family

This web page shows only a small excerpt of our Risco research. Another 75 words (5 lines of text) are included under the topic Early Risco History in all our PDF Extended History products and printed products wherever possible.

Cornish surnames are characterized by a multitude of spelling variations. The frequent changes in surnames are due to the fact that the Old and Middle English languages lacked definite spelling rules. The official court languages, which were Latin and French, were also influential on the spelling of a surname. Since the spelling of surnames was rarely consistent in medieval times, and scribes and church officials recorded names as they sounded rather than adhering to any specific spelling rules, it was common to find the same individual referred to with different spellings of their surname in the ancient chronicles. Moreover, a large number of foreign names were brought into England, which accelerated and accentuated the alterations to the spelling of various surnames. Lastly, spelling variations often resulted from the linguistic differences between the people of Cornwall and the rest of England. The Cornish spoke a unique Brythonic Celtic language which was first recorded in written documents during the 10th century. However, they became increasingly Anglicized, and Cornish became extinct as a spoken language in 1777, although it has been revived by Cornish patriots in the modern era. The name has been spelled Roscoe, Roscrowe, Roscrow, Rosecrowe, Roscow and others.

More information is included under the topic Early Risco Notables in all our PDF Extended History products and printed products wherever possible.

Migration of the Risco family

Amongst the settlers in North America with this distinguished name Risco were William and Rebecca Roscoe who settled in Boston Massachusetts in 1635 with their children, Samuel, William, Sarah, and Mary.