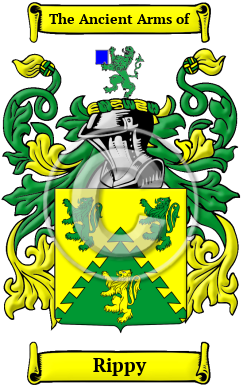 The present generation of the Rippy family is only the most recent to bear a name that dates back to the ancient Anglo-Saxon culture of Britain. Their name comes from having lived in the village of Ripley found in various locations in England including Yorkshire. The surname was originally derived from the Old English words ripel meaning strip of land and leah meaning wood. Thus the original bearers of the surname lived in the area that was defined by a strip of land by the forest. [1]

Interestingly "the chapel, [in Ripley, Surrey] which appears to have been founded about the end of the 12th century, is, in a record of the time of Edward II., called the oratory of Ripelia or Ripellee; and in the 2nd of Edward VI. seems to have been regarded as a chantry chapel." [3]

Early Origins of the Rippy family

The surname Rippy was first found in Yorkshire at Ripley. "This place was anciently the property of the Ripley family, by marriage with whose heiress, about the latter part of the fourteenth century, it was conveyed to Sir Thomas Ingilby, whose descendant, William, was created a Baronet in 1642: the title, becoming extinct, was revived in 1781, and has passed to Sir William Amcots Ingilby, the present owner of the estate. During the parliamentary war, Ripley Castle was visited after the battle of Marston-Moor by Oliver Cromwell, who passed one night here; it was originally built in 1555, and having been much enlarged and improved during the present century, is a handsome castellated mansion, finely situated in a demesne tastefully laid out. " [3]

In Scotland the family is generally believed to have descended from the Yorkshire branch. Here we found: "Bernaidus de Rippeley witnessed the gift by Alexander II of ten marks annually to the Abbey of Arbroath in 1247 (RAA., I, p. 202), and in 1249 he witnessed a charter de Werenna de Muskilburg (Musselbergh) to the monks of Dunfermline. He also witnessed confirmation of the gift of the lands of Prendergest to the monks of Coldingham in the reign of Alexander II. Willelmus de Rypeley is mentioned in a charter of 1279 as the progenitor of Sir William de Dolays (Dallas), and as having held the lands of Dolays Mykel under a grant of confirmation of William the Lion." [5]

Early rolls include the following early spellings: Bernard Rippeley in Yorkshire, 1175-1183; Roger Rippeley in Northumberland in 1242; and Richard Rypplay in the Yorkshire Poll Tax Rolls in 1381. [6] The later rolls also include: Matilda de Riplay in 1379. [7]

Early History of the Rippy family

This web page shows only a small excerpt of our Rippy research. Another 60 words (4 lines of text) covering the years 1490, 1400, 1682, 1758 and 1721 are included under the topic Early Rippy History in all our PDF Extended History products and printed products wherever possible.

Until the dictionary, an invention of only the last few hundred years, the English language lacked any comprehensive system of spelling rules. Consequently, spelling variations in names are frequently found in early Anglo-Saxon and later Anglo-Norman documents. One person's name was often spelled several different ways over a lifetime. The recorded variations of Rippy include Ripley, Rippley, Rippley, Rippleigh, Ripleigh, Riplea and many more.

Notables of this surname at this time include: George Ripley (died 1490), and English alchemist, born at Ripley in Yorkshire. However, this branch seems to have become extinct during the fifteenth century. The alchemist Ripley has been confused with George (or Gregory) Ripley (d. 1400?), a Carmelite friar of Boston, and author of lives of St. Botolph and John of...
Another 59 words (4 lines of text) are included under the topic Early Rippy Notables in all our PDF Extended History products and printed products wherever possible.

In the United States, the name Rippy is the 8,357th most popular surname with an estimated 2,487 people with that name. [8]

Rippy migration to the United States +

Thousands of English families boarded ships sailing to the New World in the hope of escaping the unrest found in England at this time. Although the search for opportunity and freedom from persecution abroad took the lives of many because of the cramped conditions and unsanitary nature of the vessels, the opportunity perceived in the growing colonies of North America beckoned. Many of the settlers who survived the journey went on to make important contributions to the transplanted cultures of their adopted countries. The Rippy were among these contributors, for they have been located in early North American records:

Rippy Settlers in United States in the 19th Century

Rippy Settlers in United States in the 20th Century