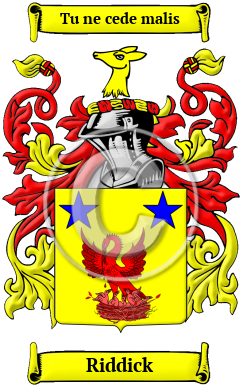 Early Origins of the Riddick family

The surname Riddick was first found in Kirkcudbright, where they held a family seat. They held a family seat in the barony of Reddick, slurred as in Berwick from Red Wick. The early pronunciation of the name was Rerrick, hence, Archdeacon Gilbert de Rerrick of Glasgow who was elected to Scottish Parliament in 1467. At this time the name took on the more modern spelling of Reddik, and John Reddik was chief of his name in 1599. He held a family seat at Barharrow.

Early History of the Riddick family

This web page shows only a small excerpt of our Riddick research. Another 77 words (6 lines of text) covering the years 164 and 1646 are included under the topic Early Riddick History in all our PDF Extended History products and printed products wherever possible.

More information is included under the topic Early Riddick Notables in all our PDF Extended History products and printed products wherever possible.

In the United States, the name Riddick is the 2,491st most popular surname with an estimated 12,435 people with that name. [1]

Riddick migration to the United States +

Riddick Settlers in United States in the 20th Century

Riddick Settlers in Canada in the 18th Century

Riddick Settlers in Australia in the 19th Century